Ramien’s future remains up in the air after rejecting Bulldogs

Canterbury have missed out on one of their top recruitment targets after Jesse Ramien knocked back their three-year deal.

The Bulldogs placed a Friday afternoon deadline on their offer to Ramien in a bid to fast track the process and decide whether to shift all of their focus onto their pursuit of Apisai Koroisau and Herman Ese’ese. The departing Newcastle centre informed Canterbury officials he will not be shifting to Belmore, leaving his future undecided.

The Bulldogs aren’t the only team Ramien has knocked back. North Queensland were a suitor for the 22-year-old and were one of the favourites to land his signature. However, Ramien also knocked back their advances after deciding he didn’t want to shift to Townsville.

The Cowboys are now sweating on Valentine Holmes, who will return to the club if he fails to realise his NFL dream. 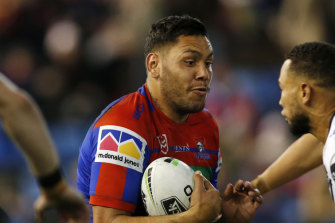 The teams remaining in the mix for Ramien’s services will need to offload contracted players to free up the funds needed to accommodate him.

Cronulla, the club he made his NRL debut at, are hopeful there could be a homecoming next season. The Sharks will part company with Bondi-bound Kyle Flanagan and Newcastle signing Jayden Brailey at the end of the season.

However, they are still looking to shed more players given a handful of them – including Shaun Johnson, Andrew Fifita, Josh Dugan, Matt Moylan, Aaron Woods and Wade Graham – are taking up a huge chunk of their salary cap. The issue is exacerbated by the $350,000 penalty the club is carrying next year as a result of their salary cap breach.

As revealed by The Sun-Herald last weekend, Parramatta are keen on former NSW prop Matt Prior if he is released from the final year of his contract. If Prior departs, the Shire outfit may be able to squeeze Ramien back into their roster.

The Eels are also considering making a play for Penrith’s Reagan Campbell-Gillard, but his asking price – he recently signed a mammoth five-year extension with the Panthers – may be too high if he isn’t heavily subsidised.

Wests Tigers are also keen on Ramien, but they have their own salary-cap mess to contend with. The joint-venture outfit is trying to offload big-money players Josh Reynolds, Russell Packer and Chris McQueen, while they are also hoping for a salary-cap exemption if Ben Matulino is medically retired.

Melbourne would also consider Ramien if they were able to offload one of their current centres. Will Chambers and Curtis Scott are on big deals and it is unlikely a rival club would be prepared to pick them up.

The departure of Newcastle coach Nathan Brown at the end of the season prompted some Knights officials to discreetly sound out whether Ramien would consider staying put. However, Ramien is keen for a fresh start next year.

Newcastle forward Ese’ese is also considering a three-year Canterbury deal, although the parties are believed to be about $50,000 apart.

Several NRL clubs were prepared to make a play for Bulldogs skipper Josh Jackson if he was to become available, but the blue and whites have made it clear he isn't going anywhere.

“Josh and I have already had initial discussions about a contract extension and we are both comfortable with focusing on the rest of the season and then being able to sit down in the off-season to talk in more detail,” Bulldogs chief executive Andrew Hill said in a statement.

“With the good recent run of performances, both of us would prefer that everyone can concentrate on continuing to play good football before we get together to discuss things further at the end of the season.”