St George Illawarra sponsor Norm Black has come out swinging at the NRL for its treatment of the Dragons in their failed attempt to bring Israel Folau to the club, saying the game’s bosses led them “down the garden path”.

The Dragons sounded out the NRL about signing Folau, but withdrew their bid just days later following significant backlash. 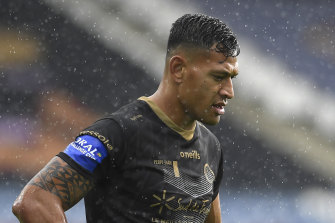 The Dragons’ attempt to bring Israel Folau back to the NRL fell flat.Credit:Getty

Black, the founder of travel company TripADeal, has also leapt to the defence of Dragons chief executive Ryan Webb, who has been roasted for his role in what turned out to be a highly embarrassing episode for the club.

“The first thing that needs to be said is that anyone who thinks for a moment that the Dragons acted in a reckless or thoughtless manner when it came to looking at Folau … well, they have rocks in their head,” he said.

“Do you think they didn’t consult me or consult other sponsors long before this became a public stitch-up of the club and the CEO? The board was across all of this. I think they met twice and it was discussed with them. So Ryan isn’t some kind of cowboy.

“But here is where I have an issue: I think the club was poorly treated and positioned by the NRL. They gave the club the rope and then they quietly hung us. There was never a firm no from the NRL … instead they allowed us to explore it and led us down the garden path.

“They allowed the club to look rash and stupid, and the reason they didn’t cut it off straight away is because the NRL knows they would have had to face a court case. They knew there was a restraint of trade or something similar at risk facing them.

‘They [NRL] outsmarted the club in their mind, but do they consider the damage they did to the club in the process of making themselves looking smart or without fault?’

“They outsmarted the club in their mind, but do they consider the damage they did to the club in the process of making themselves looking smart or without fault? The damage to sponsors of the Dragons or to the boss of the club? I don’t think they did.”

“Ryan has been hammered, but I actually think he showed balls of steel,” Black said. “When the coach came to him and said he wanted Folau he could have knocked it on the head but he did his job and explored the idea and he has to be congratulated for that. You need to remember that Folau has already played professional sport since what happened in rugby, so it was worth exploring.

“There are very few people who would support his stance [on homosexuality], but he was willing to co-operate and you try and tell me that league is not a game that gives blokes another chance. Idon’t think I need to start listing players who have had a second or third chance. 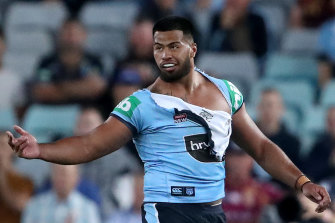 That’s a cop-out, which is going to do nothing to stop the off-season carnage we see every year. And how do you determine an appropriate fine for someone on $1million a year compared with another player on $100,000? It will just lead to more inconsistency.

The only way to improve player behaviour is by insisting that every club develop the right culture. A culture where players who break the law feel so bad that they never reoffend. Melbourne have been doing it for years.

Mystery still surrounds Cameron Smith’s playing future. Without claiming to be close to Smith’s camp, I’ve been told he is being used in a marketing plan for a product that other retired players have endorsed. It will be released next month.

Unless he is allowed to be involved in this product as an active player – something other players are not – it would indicate his playing days are over. His lack of training with any club would appear to be another significant clue, but the lack of an announcement is keeping everyone on their toes.

The Jarrod Mullen redemption story may not be all it seems. In fact, he admitted he has one final part of his life to tidy up: a $125,000 gambling debt to a mate.

Mullen has been acting as a bookmaker of sorts for a mate and is facing a debt of $125,000 as his friend considers his legal options and studies a report from a private investigator to determine where his cash went and who owes him what.

To his credit, Mullen is trying to battle his way back from a four-year ban from the NRL in 2017 for using steroids and a recent conviction for supplying cocaine. 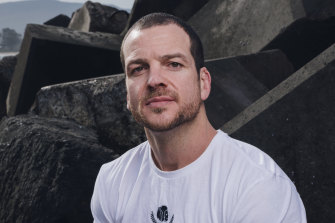 Jarrod Mullen is trying to battle his way back from a four-year ban from the NRL in 2017 for using steroids and a recent conviction for supplying cocaine.Credit:James Brickwood

“I want to say I did the wrong thing by my friend and I am very sorry,” Mullen said. “I know I’m lucky to be getting another chance at life and footy, but I’ve got to own this and right this wrong. It’s hard to face this and it’s not fair on my family.”

This column has a raft of text messages showing Mullen taking bets for a mate in America. There are also two contracts between Mullen and his mate: one of the contracts is to pay a weekly amount when he accumulated a big debt and another showed Mullen owed him $125,000. That has not been signed by Mullen.

Mullen responded: “u know that’s not possible … just talk to me and we can sort something out.“
A private investigator was employed by the man owed the money because Mullen told him a third party, whose name I have, was responsible for the bets and missing money.

When pushed about the whereabouts of the third party, Mullen said he may have been scammed. The private investigator found the third party does exist and works as a wagering consultant.

Two days after I contacted him, Mullen said he would pay up. “It may mean I’ll need to sell a few things,” he said. “I just don’t need this stuff being played out in the media.”

There are rumblings at the Knights about David Klemmer. There have been whispers that all is not right between Klemmer and sections of the club. My tip to club management is to get the former Bulldogs star on side. To be a top-eight team, or better, they need a happy Klemmer.