‘NRL did not follow its own rules’: Ex-Storm directors in fresh appeal of cap penalty

On a fateful day in Melbourne Storm history, the club's then chairman had flown to Sydney with chief executive Matt Hanson and director Craig Watt to meet NRL chief executive David Gallop and salary cap auditor Ian Schubert to own up to systemic salary cap cheating. 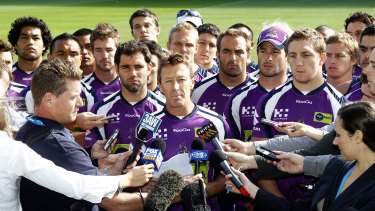 After landing, they took a taxi to the Holt St office of News Ltd – the club’s owners at the time and a 50 per cent shareholder of the NRL – arriving at 10.15am. An hour later, they turned up at NRL headquarters at Moore Park with News legal counsel Ian Philip in tow.

According to his notes, they discussed with Gallop and Schubert the level of cap breaches in 2008 and 2009 and their commitments for 2010. They could not respond to questions about the 2006 and 2007 seasons as Hanson had not been at the club then – Brian Waldron had been in charge.

“Schubert talked of the whistleblowers (obviously more than one [he was] insinuating that there was one still working at the club),” Moodie wrote in the notes, seen by The Sydney Morning Herald and The Age. “After about 45 minutes we were asked to leave. At this stage Gallop mentioned that they were considering penalties – that might include the loss of premierships and the ability to compete in 2010.”

Thirty minutes later, after being shuffled into another room where the Storm trio and Philip discussed the potential size of the 2010 breaches, Gallop returned to announce to them the extraordinary sanctions: the stripping of the 2007 and 2009 premierships, three minor premierships, a $500,000 fine, the return of $1.1 million in prizemoney and a stipulation the Storm compete for the rest of the 2010 season for no competition points. 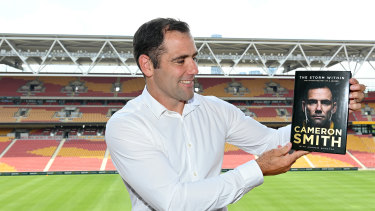 Cameron Smith launches his book in Brisbane this week.Credit:Getty

“We were absolutely stunned,” Moodie wrote.

A decade on, Moodie and former Storm director Peter Maher have revealed plans to lodge a submission with the current NRL administration to have the handling of the affair and the penalties meted out re-examined, armed with legal advice that the NRL did not adhere to its own rules in imposing them.

It comes after a week in which long-time Storm captain Cameron Smith took aim at Gallop, saying Melbourne players “were hung out to dry by the boss of the game” after the club was found to have overspent by $1.7m over five seasons.

Gallop, who declined to comment on Friday, replied by penning a News Corp column in which he branded Smith “plain wrong” and suggested he target his scorn at former Storm officials behind the rorting. He said the Melbourne officials knew the game was up and Moodie had asked on the day to "get it over and done with". 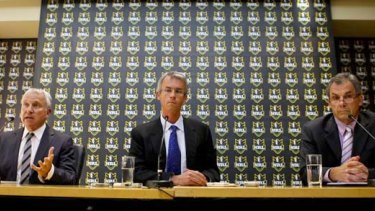 Moodie and Maher do not deny the club cheated the cap but argue the weight of the penalty was way out of alignment with later scandals at Parramatta and Cronulla. They also believe the NRL did not properly follow its sanctioning process on that April afternoon 10 years ago.

They had flown to Sydney the day after Hanson was sent a letter from Schubert in which he told the CEO of his discovery of the so-called second set of books. In the letter, Schubert said Hanson’s personal assistant had overheard his request for letters of offer for players on a recent visit to the club “and asked if I meant the folder in the cupboard behind the desk”. Schubert detailed that the next step in his probe included “a full-scale audit of the club’s financial records”, interviews with players and their tax records and asked that club officials front up at the NRL “to make a full and frank disclosure” six days later on April 27.

“We were going up to have a meeting to discuss this and all of a sudden the penalties were handed out. The press release was already done before we got there,” Moodie said on Friday. “We went up for shoplifting and we got done for murder.”

Moodie and Maher say they were advised that day by Philip, who could not be reached on Friday, that there was no avenue of appeal. After a heated phone hook-up with other directors, they begrudgingly accepted the punishment.

'Considerable pressure appears to have been placed upon you to accede to the requests of the NRL.'

“We thought because of News’ ownership of the Storm, [Philip] would be representing our interests. He blatantly wasn’t,” Moodie said. “He kept indicating there was no other alternative. We were never made aware of the fact that there is a process that should be followed.”

After the league world was told at a hastily arranged 4pm press conference, Gallop wrote to Moodie the following day, telling him that by accepting the penalty the club had “waived the requirement to proceed by way of breach notice, etc”.

But in correspondence provided to the Herald and The Age, leading silk David Grace, QC, told Moodie in 2018 that “the NRL did not follow the procedure required by its own rules”. The allegations should have been contained in a breach notice, he said, and the Storm given five days to provide written submissions.

“Considerable pressure appears to have been placed upon you to accede to the requests of the NRL in relation to findings, penalties and sanctions,” wrote Grace, who represented Essendon players in the ASADA scandal.

Maher also consulted Sydney sports lawyer Darren Kane, now a Herald columnist, in 2014, with Kane assessing “it is staggering that the whole breach notice /charging/sanctioning period was truncated by the NRL into an afternoon’s work. It is plain that the NRL did not follow its own rules.”

Kane wrote to Maher he did not believe the same process would have been followed with any of the other 15 clubs.

The severity of the Storm sanctions was analysed by former NRL chief operating officer Nick Weeks in 2016 but it was decided to let them stand.

The former directors, who say they have the support of Storm co-owner Gerry Ryan and have been concerned by the impact on players' health and wellbeing over the years, want the process to be scrutinised now and hope to push for it with Melbourne’s endorsement.

“Now it’s the completion of the season we’re going to put forward a submission,” Maher said.

“I would rather we all sat down with the NRL and the NRL said ‘listen, you’re right, due process was not adhered to. Let’s go away and have a proper hearing and let’s determine what the penalty should be'. If that’s the case we’ll accept whatever comes.”