AFL football has not seen change like it. In the space of six months every single leadership position at North Melbourne bar the chairman has changed.

North has a new chief executive, general manager of football, list manager and a senior coach appointed mid-season. While all the appointments have experience, none have experience in the positions they are now in.

They are a club of P-plate leaders.

North Melbourne chairman Ben Buckley said the club did not plan to completely overhaul its football department when it began making changes mid-season and parted ways with coach Brad Scott but he said the club was frustrated and impatient for success.

He was at pains to praise the outgoing staff members but plainly North believed they had stagnated and needed major changes to the entire football department. 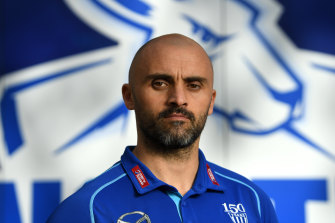 Coach Rhyce Shaw is one of a string of senior appointments at North this yeat.Credit:AAP

Brad Scott was the first significant change at the club when he left mid-contract and mid-season, acknowledging the club was determined for a re-set and re-direction and his departure provided for clear air. He was replaced by Rhyce Shaw, initially on an interim basis but soon as the permanent senior coach.

Shaw was highly regarded at Sydney, where he worked as an assistant coach for three years after retiring. He moved to North at the end of last year to work as an assistant. His is the shortest coaching apprenticeship of all current senior AFL coaches.

Then the sentiment for change gathered momentum. Cameron Joyce was moved on as general manager of football and replaced by former player Brady Rawlings, who had been list manager at West Coast. Rawlings, too, was very highly regarded at West Coast, and was put on gardening leave before taking up his appointment at North at season’s end once his Eagles contract ended. He has not, though, been a GM of football before.

List manager Mick McMahon left at the end of the season and has been replaced by respected former Champion Data analyst Glenn Luff who had been hired earlier this year as a football analyst. Luff is very well regarded from his time at Champion and like Rawlings will likely do well in his position, but he too is breaking new professional ground.

None of these appointments in isolation would be remarkable but the fact of so many leadership positions being held at once by people without direct experience in those roles is surprising.

Then there’s the non-footy shift. On top of this sweeping football change the club split with chief executive Carl Dilena, who impressive commercial success at the club but was regarded as too commercially focused.

Sources indicated the club had been eager to introduce a chief executive with a stronger football than commercial background and former board member and ex-Richmond chief executive Mark Brayshaw was on the short list.

The club then surprised with the appointment of Ben Amarfio, who has strong commercial background but little football pedigree. He worked with Buckley at the AFL in broadcasting. And, of course, was at Cricket Australia for six years until he left late last year after a change of chief executive and an overhaul of management and culture.

The likelihood is North will soon appoint an experienced football person, with a strong suggestion that respected veteran list manager Scott Clayton could be sought for a role mentoring Rawlings and Luff.

North have been bold in its appointments. They have run at the idea of change rather than run from it. They are impatient for success but also will need to be understanding of staff finding their way.