Mitchell’s anger at suggestion he is white-anting Clarkson

Sam Mitchell insists he wants Hawthorn’s succession plan to proceed as per its road map while admitting he is “pissed off” by the inference that he white-anted Alastair Clarkson.

Speaking in the wake of reports suggesting Mitchell wanted to expedite the handover process with Clarkson and take over the Hawks’ senior coaching position next year, Mitchell denied he had told the club that he would prefer it if Clarkson did not coach next year.

“Absolutely not. That has not happened,” Mitchell said on SEN on Wednesday morning.

“Everything we are working towards is Clarko coaching next year,” before adding that the delineation of responsibilities over the next 15 months remain a work in progress.

Sources at and close to Hawthorn have told The Age this week that the situation has been a challenging one to navigate and that there is confusion about who is responsible for what between Clarkson and Mitchell.

Mitchell said the seeds of a succession plan had been planted as early as 2016 when Clarkson facilitated the premiership captain’s trade to West Coast in part for Mitchell to broaden his experience, before Mitchell returned to the Hawks in 2018, joining Clarkson’s coaching panel. 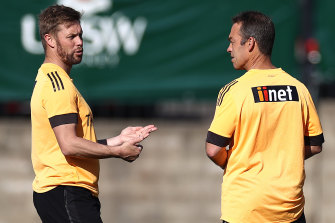 But the Brownlow medallist was adamant he had not been guaranteed the senior job by Hawthorn powerbrokers before the club decided not to re-sign Clarkson, whose contract was due to expire at the end of 2022.

The Hawks had planned to discuss Clarkson’s future at the end of this year but Clarkson fast-tracked that process in the wake of the landscape changing move of Collingwood and Nathan Buckley to part ways.

Mitchell was a leading contender for the Magpies job, but said that he chose to take the Hawthorn role over the Pies gig as he was “desperate” to coach the side with whom he played in four AFL flags under Clarkson.

The former gun midfielder, currently coaching Hawthorn’s affiliate club Box Hill, said he had been disappointed by the inference that he had undermined Clarkson.

“I kind of get a bit pissed off with people saying that [I took his job],” Mitchell said.

“The fact that people would say I am trying to push him out is disrespectful to both of us.

“As soon as I knew the club was not going to reappoint Clarko, my options became to continue on and attempt to go for the Collingwood job or if not do that, I knew someone else was going to coach Hawthorn in 2023.

“That was a separate thing to me taking over.”

Mitchell said that inevitably he and Clarkson would disagree on things, but said that was healthy, adding that a meeting between club powerbrokers, he and Clarkson last week had been productive but not answered all questions.

“You are going to have all these discussions all the time.

“You have to have people with differing views.

“At the end of that meeting, we did not have every answer … We don’t have the answers right now about how that works.

“Everything is a little bit grey.”