Saints scored eight tries in all on the night, as man of the match Lachlan Coote scored twice, Kevin Naiqama scored a hat-trick, while Jonny Lomax, James Bentley and Regan Grace each also added a try.

Coote contributed 24 points in the second semi-final at the Totally Wicked Stadium to help his side set up a mouth-watering derby clash with Wigan at Hull’s KCOM Stadium next Friday.

[email protected], next up, the #GrandFinal 🙌

Catalans went into the game without two of their key players, hooker Michael McIlorum and second-rower Joel Tomkins, because of suspension and their over-physical approach backfired as they were twice reduced to 12 men. The only disappointment for St Helens was the loss of veteran prop James Graham early in the game with a head injury, while fellow front-rower Alex Walmsley succumbed to a knee injury.

Graham, who will be hanging up his boots at the end of the season, caught a stray elbow from team-mate Jack Welsby and must undergo a series of head tests to see if he will get the chance, just like his old England captain Sean O’Loughlin, to bring down the curtain on his career on the big stage.

Catalans took the lead with a penalty, just as Hull did against Wigan 24 hours earlier, James Maloney punishing Walmsley for a high tackle on Remi Casty, but it was their only score and it was the indiscipline of the visitors that characterised the first half. Maloney was sin-binned after 12 minutes for a swinging arm on Saints winger Regan Grace and the Dragons conceded eight points in his absence.

Coote scored the opening try, running onto a pass out of the tackle from hooker James Roby, and kicked a conversion and penalty to make it 8-2 before Maloney returned to the fray. The Catalans tactics were clear as the crunching hits rained in but Saints managed to maintain their composure for centre Naiqama to extend the lead in the 30th minute, finishing off a break by his winger Tom Makinson for his first try.

Coote’s third goal made it 14-2 and it got worse for the Dragons two minutes into the second half when the full-back gathered a towering kick from his half-back Theo Fages and both he and Makinson kicked again for Naiqama to grab his second try. And it quickly became a damage limitation exercise for McNamara’s men as their defence cracked twice in five minutes.

Former Catalans second rower Zeb Taia demonstrated slick skills, patting the ball into the hands of Coote for his second try before Welsby put stand-off Lomax away for Saints’ fifth. Although the game was up for them, the Dragons continued their physical approach and Garcia was given a yellow card for a high shot on Lomax.

Saints again made use of their numerical advantage as Roby put second-rower James Bentley in for a sixth try and Coote, who scored 18 points against the Catalans in August, went past that tally with his sixth goal. As the Catalans attempted to play catch-up, Naiqama and Grace both scored long-range counter-attacking tries and Coote took his goal tally to eight from nine attempts. 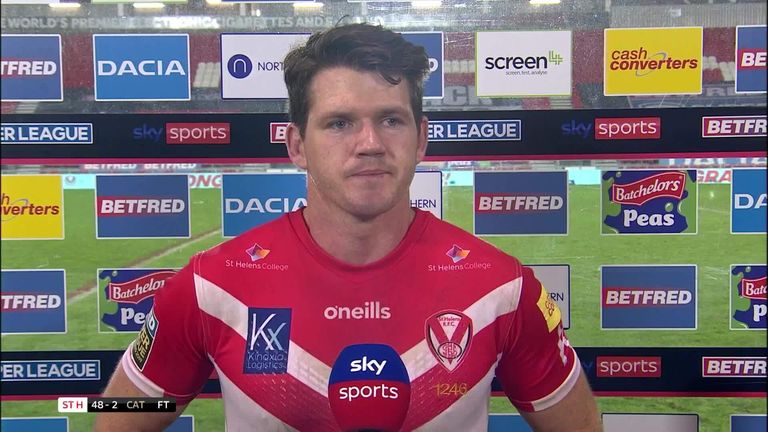