This has an emerging star defender against the Coleman medallist. Balta spent 87 minutes on Hawkins when the teams met in round 17 and held him to one goal. Balta has the strength and size to tame Hawkins. Should he be successful, it will allow fellow defender David Astbury to be used as the back-up ruckman. 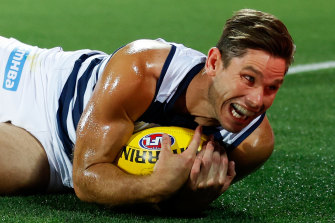 Lynch booted 1.2 and had five scoring involvements before injuring his hamstring when the teams last met. He will look to use his athleticism to exploit Taylor, although the veteran Cat has been in superb touch. Mark Blicavs will roll back and help Taylor. 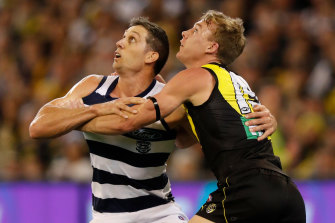 The importance of the dual Norm Smith medallist has been so pronounced through the finals that he has been involved in 40 per cent of the Tigers' scoring. Kolodjashnij, Tom Stewart and even Jed Bews shape as his likely opponents when he pushes inside 50. When on the ball, a Cam Guthrie, Brandan Parfitt or Jack Henry need to get involved defensively.

Dangerfield's move up forward has largely been a success, although he did not hit the scoreboard last week despite spending 91 per cent of the game inside attacking 50. Vlastuin, key stopper Dylan Grimes and Nathan Broad are all options to take him. If he goes into the midfield there could be a mouth-watering, one-on-one battle with Martin.