Jason Horne-Francis to return via VFL

North Melbourne’s No.1 draft pick Jason Horne-Francis will play in the VFL against Collingwood on Saturday morning at the AIA Centre as he returns from a two-match suspension.

The Kangaroos match committee, led by coach David Noble, decided to ease him back into action because he has not played since June 12. North Melbourne’s bye fell in the week after he was suspended for striking Giants midfielder Josh Kelly. 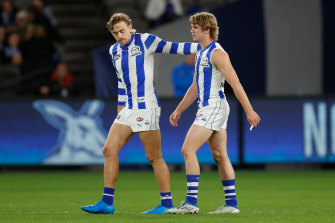 Noble informed Horne-Francis of the decision at training on Wednesday and according to North insiders he took the decision well, accepting the rationale.

Horne-Francis had played every game leading up to his suspension, earning a rising star nomination for his performance in round seven.

He has been a solid contributor in a battling team, with his frustration growing as the Kangaroos battled to compete.

The 19-year-old earned unwanted headlines when he returned to South Australia after a game in Perth without informing the club, in what was described as a mix-up in communication. He has also deferred talks on an extension to his contract beyond 2023 until at least the end of the season, despite the Kangaroos wanting to lock him in early in the season.

North Melbourne rejected several ambitious bids from other clubs to get their No.1 pick before the draft, so they could secure the South Australian who had played senior football with South Adelaide in the SANFL.

Adelaide were one of the clubs that attempted to secure the pick, and they remain interested in attempting to lure him back home.

The Kangaroos are having a horror season and have won just one of their first 15 games. They have a percentage of just 49.5 and are not expected to win again this season. Noble is under increasing pressure and the club has appointed experienced football person Geoff Walsh to conduct a review of the football operation.

Geelong thrashed the Kangaroos by 112 points at GMHBA Stadium last Saturday night in a performance that put many players under pressure to keep their spots. However, Noble flagged at the post-match media conference that Horne-Francis might play VFL.

Collingwood play North Melbourne VFL at the AIA Centre at 11.05am on Saturday.