It’s Richmond v Geelong in Brisbane, but fans try to make the best of it

In any other year, it would be a dream grand final match-up: two big Victorian clubs, both with fixed geographical identities.

Geelong, proud regional city, up against Richmond, the storied inner city suburb. Places that have known struggle and where the air is thick with football fever if their team is in it. Melbourne should be abuzz with excitement.

But on Swan Street in Richmond this week, it felt almost as if the Tigers had lost in the preliminary final. That they weren't on the cusp of a dynasty comprising three flags in four years. 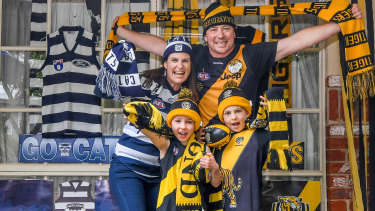 Paddy and Kath Harrington with their sons Callan (8) (front right) and Tommy (7) prepare for the big game on Saturday. Credit:Joe Armao

Unlike other years, it was difficult to even find someone dressed in yellow and black. In the shop windows, "strong and bold" Tigers paraphernalia competed for space with "for lease" and "closed until further notice" signs.

At the Richmond Club Hotel, a famed pre-game watering hole, the doors were shut. There was no boozy chat in the front bar of the London Tavern about Dusty Martin winning a third Norm Smith.

Grand final week in Melbourne is not usually a time for the football atheist. From the Brownlow count on Monday through to parade on Friday, it is hard to avoid the city's obsession.

But this year, of course, everything is different. COVID-19 restrictions have forced the cancellation of just about every grand final ritual on offer. Despite the differences, fans are still trying to make the best of it.

Richmond fan Sean Ross compares the build-up to following a sports team from overseas, as if you were staying up till midnight to watch your club in the FA Cup final: fun, but not quite the same as being part of it.

"It has just been a different season as a fan. The players and entire club have been amazing and it has been a very welcome distraction in Melbourne," he says.

A year ago, Sean watched Richmond beat GWS in the grand final with his father, their last match together before he passed away. This year, he'll watch it at home with his wife, who isn't into football. 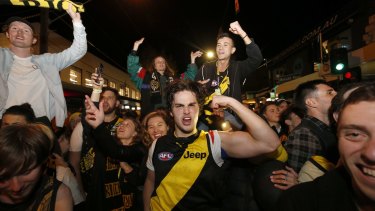 "I definitely feel a little bit of disconnect from not sharing game day with mates and family," he says. "I'll still be cheering loud while watching at home though."

In a normal year, Tigers fan Paddy Harrington would have booked a pub in Richmond in the morning before heading over to the ground for the game. There would have also been a big lunch in the MCG dining room for his tipping competition.

Instead, the lunch was held over Zoom and he will watch the game at home with his family. It will be a divided house, with his kids supporting Richmond and his wife, Kathleen, backing Geelong.

"You've got to come to terms with the fact that it isn't the same," he says.

After living in Sydney during the previous Cats golden era of 2007-2011, Kathleen is a bit sad about missing out on the buzz this year. Her MCC membership would have got her into the ground. 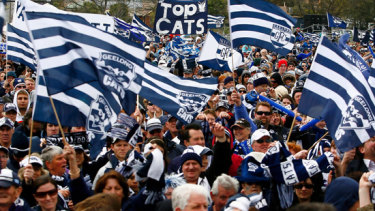 "We'll watch it as long as we can together but there's every chance there will be two rooms and two TVs," she laughs.

Down in Geelong, the mood appears to be slightly more upbeat, if only because there are fewer restrictions placed on regional Victorians.

Pubs in Geelong are allowed to open with up to 40 guests indoors, while households are allowed two guests from another household.

Cats fan Darrin Goodall-Wilson notes that the Geelong Cup on Wednesday would have thrown out the rhythm of a normal grand final week, regardless of the pandemic.

"It's bit of a slow burn, and obviously there's not as many out and about," he says.

"There's certainly flags on letter boxes and so forth. The Sphinx Hotel has a big 'Go Cats' mask on." 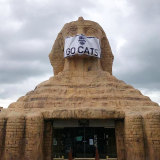 However, it's not quite the same passionate atmosphere of previous grand finals involving the Cats.

"It's certainly different, it's more about the footy," he says. "It's been taken away from the supporter base, we've been isolated."

One big question is what celebrations will happen after the game, once Geelong or Richmond have been crowned as premiers on Saturday night.

The wild scenes on Swan Street in recent years have prompted police to warn that they will be out in force to fine people if they breach lockdown rules.

"It could get very messy, the same will happen in Richmond," says Mr Goodall-Wilson.

"I think the town will go off, I have vivid memories of 2007 [when Geelong won the premiership]. It was huge."

Get our Coronavirus Update newsletter for the day’s crucial developments and the numbers you need to know. Sign up to The Sydney Morning Herald’s newsletter here and The Age’s here.