Former Essendon champion Matthew Lloyd remembers sitting in the old MCG rooms in May 1999 as the names of those picked in that year's Victorian squad were called out.

As soon as each name was yelled the player concerned had to indicate whether he was willing and available to play in the match against South Australia in six days’ time.

Lloyd, then 21, did not hesitate to declare himself available but about a dozen of his potential teammates took the escape route back to their clubs, carrying either an injury or a distinct lack of interest. 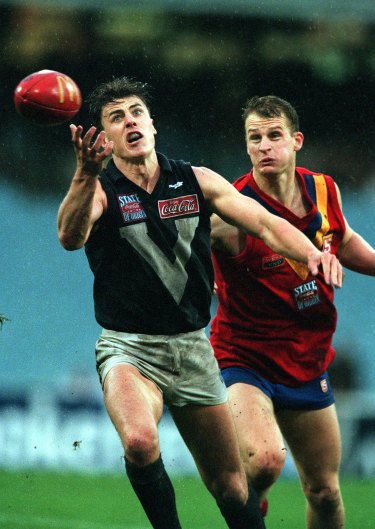 Pride of the jumper: Matthew Lloyd juggles a mark in 1999.Credit:Getty Images

Having fallen in love with state-of-origin football growing up in Melbourne's suburbs in the '80s he aspired to represent his state, but he sensed at that moment he might be out of step with his peers.

"Apart from winning a premiership, one of the greatest thrills I had in footy was playing for Victoria," Lloyd said. "I would have done anything to play, but I remember that day thinking, 'This might be the end of it,' with the lack of response we were getting from key players."

Victorian coach Robert Walls and chairman of selectors Gerard Healy had been forced to do the roll call after several star players pulled out in the lead-up to the game. Their lack of enthusiasm became infectious.

"At least we knew the ones who were there wanted to be part of it," Walls said.

The ramifications were apparent to Walls as he unwittingly prepared to become the last person to coach Victoria against South Australia.

"I didn't know if it would be the last one for a long while, but there was no doubt it had lost its gloss," Walls said.

Even the doyen of commentators, Bruce McAvaney, sensed the future when he called from the MCG commentary box at the opening bounce that this was "maybe the last time these two teams play one another".

McAvaney's call was prescient. Just 10 years after the state-of-origin concept reached its peak (for Victorians at least) in the 1989 match at the MCG, when 91,960 saw the 'Big V' dominate SA and win by 86 points, with champion forwards Tony Lockett, Jason Dunstall (who was actually from Queensland) and Dermott Brereton contributing 12 goals between them, it was all over.

The seeds of the declined had been sown in 1987 when the West Coast Eagles entered the competition. The Adelaide Crows' introduction in 1991 only accelerated its extinction. 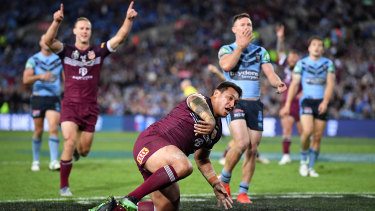 State Of Origin in rugby league is a very big deal.Credit:AAP

The truth is many AFL coaches are twitchy ahead of Friday night's bushfire relief match as their best players go into battle on the eve of the season, respecting the cause but worrying about the risks.

Still, Lloyd's memories of wearing the 'Big V' are so vivid he would encourage any player to play.

"It was brilliant, absolutely brilliant. To play for Victoria on that weekend off, I just jumped at the chance," Lloyd said.

He remains hopeful there might be a chance to play matches every four seasons so modern players can have the same experience. Others suggest state teams should be selected and jumpers awarded each year as part of Australian Football Hall of Fame celebrations.

Friday night's match might determine the enthusiasm for the concept but with International Rules to resume in Ireland at the end of this season and a premiership in everyone's sights, the chances of a full scale return are unlikely. Jackson, the former chief executive, summed up the thoughts of many: "I just pray no-one gets hurt."