In Astbury, out Vlastuin as injury woes continue for Tigers

Richmond hope to regain premiership defender David Astbury for next week's vital clash against Fremantle at Optus Stadium, but they may lose reliable backman Nick Vlastuin after he suffered a similar ankle injury in Saturday night's 47-point loss to the Western Bulldogs.

Vlastuin finished the game after receiving treatment late in the first quarter, however Tigers coach Damien Hardwick said the 25-year-old was in doubt. 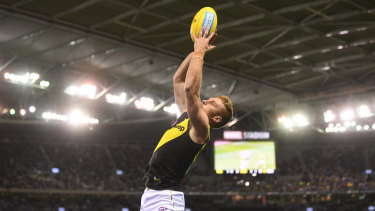 "He did finish the game but it's one of those ones, he's put a lot of weight through it," Hardwick said.

"He's probable at this stage. We'll wait and see."

Astbury just missed being available for selection after injuring his left ankle against Melbourne on Anzac Day eve, when he was stood on as he entered a marking contest and the Tigers hope he will be recovered in time to take on the Dockers' imposing forwardline.

"We presume so. It was one of those ankles that looks severe. It was severe and we thought he may have been a chance of getting up, but it's one of those ones," Hardwick said.

The Tigers are already without skipper Trent Cotchin and vice captains Alex Rance and Jack Riewoldt as their poor run with injury in 2019 continues to bite.

Speedster Daniel Rioli was also hampered during the game after copping a knock to his thigh and hip in a big collision with the Western Bulldogs' Lachie Young.

Hardwick said he will need time to recover from the knock.

"He's bruised and battered at the moment. We needed him to keep playing, and to his credit he put his hand up to play, but he's pretty sore," Hardwick said.