‘In a bind’: Pies admit salary cap pressure was ‘key’ to fire sale

Collingwood have conceded salary cap pressure was a "key part of the decision" to offload star players as part of their trade period fire sale last week.

"Salary cap pressure was certainly a key part of the decision [to clear players out in the trade period]," Anderson wrote. 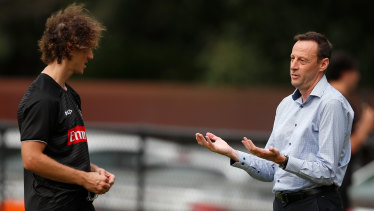 "To be blunt, we found ourselves in a bind: we were without realistic access to the free agency market with our salary cap being at its limit. We have had quality players expressing interest in coming to our club, interest we could not realistically pursue due to our cap limitations.

"This could not continue and so some tough and, frankly, painful decisions had to be made … with the salary cap relief created, we can aggressively attack the free agency market from next year on if we so wish."

Anderson did not address Stephenson's claims that he was given little explanation from the club before being traded, nor did he discuss Treloar's claims that Nathan Buckley wrongly told him senior players wanted him out of the club.

"My manager sort of came to me, and then I heard nothing from the club. I gave Bucks [Buckley] a call myself to see what was going on and he just pretty much said, 'Mate, look for a trade as aggressively as you want and we'll try facilitate it.' There wasn't a very clear reasoning or anything but like I said I think it's all worked out for the best," Stephenson said last Thursday, after his trade went through.

In his first press conference as a Bulldog, Treloar said Collingwood believed he could not play his best footy while his partner Kim Ravaillion and their child lived in Queensland, which he then said the club used as justification to trade him to the Western Bulldogs.

"But they were adamant on moving me on so no matter how they were going to go about it, it was going to happen. It was a fight up until the end, because I wanted to be at Collingwood."

While he admitted their trade period fire sale could have been better explained to supporters, Anderson, the club's top executive, also backed the football's department's decisions during the off-season.

"I understand this reaction, as not all that we are attempting to do has been obvious or well explained," Anderson wrote, adding a members forum would be held before the end of the year."

Anderson said along with now having access to free agents because of cap space and targetting high quality talent in the draft, the club would also improve from within thanks to players like Isaac Quaynor, Nick Daicos, Brayden Sier, Will Kelly, Mark Kean and Tyler and Callum Brown.

"Being realistic about the future was also something we felt was required. Despite the fantastic elimination final win only a few weeks ago in Perth, we fell well short in our semi-final against the Cats the following week," Anderson wrote. "The unflattering result was not a reflection of our season but it could not be ignored, either.

"We believed that we could stay in and around the mark for some time but knew that to maximise our opportunity to win the premiership and build a sustainable future, really difficult decisions were required.

"We are confident of taking an even stronger hand than we currently have to next month's AFL national draft."

The Age reported on Saturday that the Pies could try to use their extra first-round pick this year or a future first-round selection to move up the 2020 draft order.

He said the club had a responsibility to players not to discuss specifics during trade period but the club will consider ways to improve following member angst and feedback this week.

"We will continue to communicate with you as we lead into the national draft and beyond, as we build towards round one. Your support is greatly valued."

Pies supporters on Friday started a petition to try and "hold the president, coach and board accountable" following the trade period. It so far has more than 1000 signatures.