I’m imposing my own deadline: Gutherson keen to settle future

Clint Gutherson is just days away from ending his “frustrating” contract saga after imposing a deadline on himself to make a call on his future.

Gutherson denied any knowledge of Parramatta applying a Friday deadline on his three-year, $1.95 million contract offer but was keen to resolve the impasse regardless. The sticking point is time rather than money, with the fullback wanting a four-year deal while the club won’t budge beyond three due to his injury history. 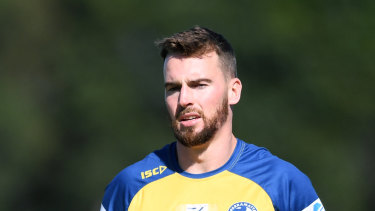 The Eels skipper is tipped to stay put, with both parties seeking a definitive call after months of protracted and public negotiations.

“I've got to make a decision and I've got to try and do it sooner rather than later, get everyone and whatever [decision] I make, just move on from it,” Gutherson said.

“I don't think there is (a club-imposed deadline). Last time I spoke to (manager) Sam (Ayoub) he said there wasn't. I want to get it done. I've put one [a deadline] on myself. It's getting to the point now that I have to pick, and to decide my future soon. It'll be sooner rather than later

“This week or early next week, I'll try and knock it all off and move on from there.”

Manly have been watching the situation with interest, eyeing Gutherson as a potential halves partner for Daly Cherry-Evans. However, they won’t be able to offer more than Parramatta, particularly after confirmation Dylan Walker will remain on their books after being found not guilty of assaulting his fiancee.

“I tried to get it done six or seven months ago and it didn't work, it's just the way it's played out," Gutherson said.

The Eels re-signed coach Brad Arthur for a further two years on Tuesday and, given how close he is to Gutherson, the move will likely increase the chances of the captain following suit.

“But I've just got to sit down and have that tough discussion, think about and make that decision.”

The drama hasn’t affected Gutherson’s form. The Cromer Kingfishers junior has run for 1638 metres so far this season, more than any other NRL player. He has been an integral part of a Parramatta resurgence that was halted, at least momentarily, after a 64-10 shellacking at the hands of the Storm.

Gutherson remonstrated with the referees during the loss, but said that was due to the score rather than frustrations over contract talks.

“You don't want to be beaten like that. It's embarrassing. They were on fire but we were horrible. And the best thing about rugby league is we can turn it around this week. We've got straight back into what we've needed to do this week and now we've done our prep and we'll focus on the Cowboys.”