‘I can’t wait to see him’: Dragons excited about de Belin’s NRL return

Jack de Belin will make his return to the NRL on Thursday night with his St George Illawarra teammates backing him to handle the long-awaited comeback.

De Belin joined his teammates at training on Monday after surviving his first hitout via the NSW Cup on the weekend since learning he would not stand trial for a third time on sexual assault charges last week. 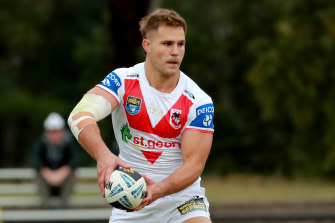 “He’s the hardest trainer and in immaculate shape. It was good to see his lungs burning on the weekend. However, ‘Hook’ [Griffin] wants to plays him, it will benefit the team – when Bomber is back he’s one of the best forwards in the game.

“I can’t wait to see him go [around]. I think if anyone handles [the new game] it will be ‘Bomber’. It’s the hardest game in the world, especially with the six-again rule … you can do as much fitness as you want, but match fitness you need under your belt.

“It will take him a few games to find his feet, he’ll be the first person to tell you that, but Bomber out of all people has looked after himself every single day, been going to the gym and looking after his body. I can’t wait to see him get back out there.”

De Belin was sidelined by the NRL under their no-fault stand-down rule as he faced two trials in the NSW District Court of aggravated sexual assault after an accused assault of a woman at a North Wollongong unit in the early hours of December 9, 2018. Neither jury trials could reach a unanimous or majority verdict, and de Belin was informed late last week the Director of Public Prosecutions would not be pursuing a third trial.

There was plenty of emotion at full-time at Lidcombe Oval, and Lomax expects similar scenes when de Belin pulls on the boots at Nestrata Jubilee Stadium.

By playing him at home, the Dragons will spare de Belin the taunts of rival fans, not to mention the intense headlines given it is Origin week.

“The fans will be behind Jack 100 per cent as we all are at the club,” Lomax said.

“He’s one of my best mates, to see what his family and himself have gone through, it’s been unbelievable how he’s handled himself through this whole situation.

“We’ll be stoked to see him run out. We’ve seen how much emotion he had at the end of the game last week, and it will be similar this week.”