How Bellamy’s tough love put Melbourne back on track

Most coaches would like to return to the day when lows following a loss lasted a week, as opposed to evaporating at the ice bath.

The view that modern players, members of a generation with a short attention span and an advanced sense of entitlement, "move on" very quickly from disappointments frustrates coaches who played in the 1980s. 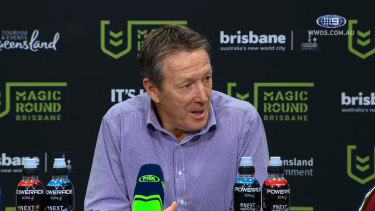 Rout: Craig Bellamy in a brighter mood after the Storm’s thrashing of Parramatta in Brisbane.Credit:ninevms

Yet it took an old-school philosophy to produce the biggest weekly turnaround this season when the Storm’s Craig Bellamy extracted a 64-10 win from his team against Parramatta, following a listless 20-18 loss to Cronulla eight days previously.

When Bellamy walked back into the Storm dressing-room at Shark Park, following his press conference, football manager, Frank Ponissi, asked him: "What did you say?" Bellamy replied: "It was an edited version of what I told the players". In other words, he told the media what the players had heard minutes earlier, minus expletives.

It has widely been reported as a "spray", usually an apt word for a Bellamy tirade, given the spittle associated with his outbursts. But the message was inescapable: unless the players lifted their game, which has been below par for a month, he would find replacements. He didn’t question their ability, merely their commitment.

Sometimes, a coach delivers two different messages – one to the media and another to the players.
It’s not as if he didn’t have another message to communicate to the media, admittedly subtly, given the fines for criticising referees.

Some of the calls in the game were poor and a touch judge was dropped for making two horrendous mistakes, including a foot on the touchline which the laws allow when playing the ball. Even the video referee, with all the benefits of replay, made a blunder.

But there was no mention of this, either to the players, or the press.

Social media, which takes about a month to make mountains out of molehills, is a challenge for any NRL club

It meant that the private and public message to the players was the same. Furthermore, as the media repeated Bellamy’s comments through the week, it’s not as if he retreated from his view. On the Monday morning, at a meeting of the entire squad, the message was the same as three nights earlier, likening their lack of killer instinct to the man who extends a helping arm to a fallen opponent, rather than delivering a knockout blow.

Then, at the team debrief, assistant coach Mark Brentnall directed questions to the underperformers on what they had learnt hours earlier.

On Wednesday, former player Dallas Johnson addressed the team. Who does a coach call upon when a team is failing to live up to club values? Answer: the ex-player who most epitomised them.

It’s tempting for a coach to change message during the week. His anger diminishes and, as he studies the video, everything doesn’t seem so bad. Bellamy changed nothing, not even training times or loads. Nor did he change the team, except for the recall of centre Curtis Scott, who had been demoted for defensive lapses but had played very strongly in the lower-tier Intrust Super Cup. 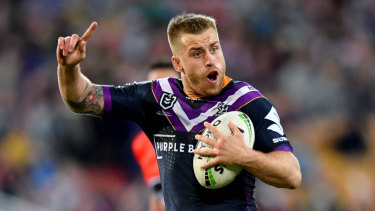 Too good: Melbourne’s Cameron Munster celebrates against the Eels.Credit:AAP

When Fox Sports dropped a smoke grenade, announcing Scott was being investigated by the NRL integrity department, it had minimal impact. Scott’s issue had been addressed five weeks earlier and League Central was satisfied with the Storm’s response. Social media, which takes about a month to make mountains out of molehills, is a challenge for any NRL club but was best answered by Scott himself who made a "shoosh" gesture to the television cameras after scoring a spectacular long-range try.

In Brisbane for Magic Round, with four teams including bitter rivals Manly staying at the same hotel, some distractions could be expected. But even when a meeting room could not be found for the final tactics talk, Bellamy refused to allow excuses to influence his message.

At half-time against the Eels, leading 24-6, he again challenged the players whether they would relax or apply even greater pressure.

Now, five days later, the Storm must do it all again against Wests Tigers, who produced their own magic against the Panthers.

Sometimes, when a team plays great, a coach wants to stand back and take a picture. But success is so difficult to sustain, even in the professional era. Bellamy knows if he blinks, the team is back in the pack.

Consistency is the code’s most elusive quality and the process-driven Storm mentor demands it daily.