Five umpires were handed their first AFL final last week based on form, while more than 1000 games of experience will be overlooked for a second consecutive week.

The selections raised eyebrows from clubs involved in September finals and The Age can also reveal that league football boss Steve Hocking even intervened, to make sure the decisions were based on performance and not just to promote youth.

Prior to last Thursday’s first final in Perth, between West Coast and Essendon, the umpires designation had five September debutants and one officiating just their second final, accounting for half of the total umpires for the first week. 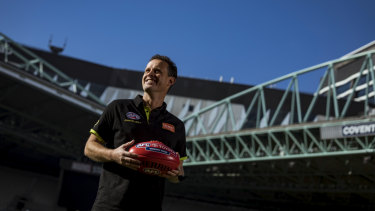 Such was the surprise at the lack of experience that Hocking questioned umpires coach Hayden Kennedy to confirm they were absolutely the best group.

But Hocking was told definitively that based on form those umpires deserved to be picked, while Shane McInerny, Dean Margetts and Jeff Dalgleish – who have more than 1000 games of experience between them – were all left out.

The selections saw several clubs involved in finals question whether the league was trying to promote youth within umpiring ranks, but that’s been strongly denied by Hocking, who has admitted to asking the question of the umpiring group.

Adding to the intrigue surrounding the situation, only one of the five debutants have survived for the two games this week, with the AFL picking a much more experienced batch for the two semi-finals.

Nick Foot (just over 100 games) and Nathan Williamson (just over 50) joined the experienced Shaun Ryan for the physical encounter between Greater Western and the Western Bulldogs, while the AFL gave Craig Fleer the opportunity to umpire his first final at the Gabba between Brisbane and Richmond, alongside senior teammates Matthew Nicholls and Chris Donlon.

Stephens has been handed his second final for Friday night’s clash between Geelong and West Coast, alongside Simon Meredith and Nicholls.Three of the most experienced umpires in the game will handle Brisbane’s showdown with the Giants in Stevic, Ryan and Ray Chamberlain.

It means, for a second week in a row, that Margetts, McInerny and Dalgleish miss out based on form.

The omissions have come as a surprise to those at club land, particularly when you consider that 400 gamer Brett Rosebury is unavailable due to injury.