Have we seen the best Trbojevic yet? Kid brother joins Tom and Jake

There could soon be three Trbojevic brothers playing in the NRL together after the youngest sibling re-signed with Manly.

Ben Trbojevic, a centre/backrower who has represented NSW at under-16s and under-18s level, has committed to the club for a further two years. His retention comes just a week after older brothers Ben and Tom re-signed with the Sea Eagles for six years on deals worth a combined $13 million. 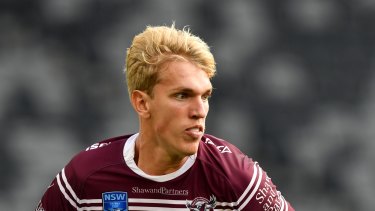 “There is no doubt he has plenty of ability and it’s now a matter of further developing his game and bringing him through slowly as he steps up to the next level.”

Like his brothers, Ben is a local junior who progressed through Manly’s Harold Matthews and SG Ball teams after playing for the Mona Vale Raiders. The 18-year-old has also played in the club’s Jersey Flegg team and is considered a future NRL player.

If all three run out onto the field together in first grade, it will mark the first time three brothers have played together since the famous Burgess clan achieved the feat.

“Having Ben join our senior squad next season with his two brothers, Tom and Jake, is fantastic for Ben, our team and our Club,” said Sea Eagles CEO Stephen Humphreys.