Campbell Graham was in the stands when the Rabbitohs last beat the Roosters in the finals.

He was one of 52,000 fans on hand at ANZ Stadium as Souths beat the Roosters in their 2014 preliminary final, the highlight an inspirational Ben Te'o try. 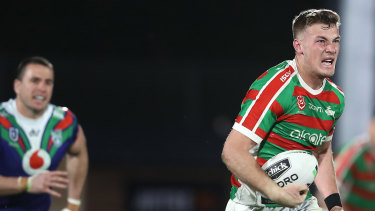 Graham is filled with the passion which defines the Rabbitohs-Roosters rivalry, having been a Souths fan for as long as he can remember.

"I was a Souths man, always. Absolutely," he said.

"I remember watching games, crazy games, close games, just knowing coming through the juniors how much passion there was between both clubs.

"It’s bled into you early. They’re the bad guys, we’re the good guys.

"But it’s the same for them. They will have the same mindset coming in against us. That is what makes the rivalry so good."

He has also had a few tastes of what the rivalry means prior to a breakout season last year.

"I played my junior footy for Souths and even playing those games, it was easy to get up for," Graham said.

"You knew the passion and the rivalry both clubs had and people you would go to school with were going for the Roosters and the other mates were going for Souths. It really builds nicely going into the game."

Having watched the rivalry from afar for so long, Graham now finds himself in the thick of the latest battle between the two clubs.

He will play a prominent part in the Rabbitohs' assault on the premiers' title defence, having been thrust into the centres with James Roberts and now Dane Gagai out of the Souths line-up in the past fortnight.

"I played a lot of my junior footy (in the centres) and (played there) through the 20s," Graham said.

"When I made it to first grade I was on the wing, so I haven’t played too many games there in the last few seasons but it’s not completely alien to me, playing in the centres.

"I’m finding my feet there and I’m starting to build a nice combination with Reyno."

His combination with Adam Reynolds is already running smoothly and Graham puts that down to the professionalism of the club's chief shot caller.

"He’s a very good player to play outside both in attack and defence," he said.

"He’s a great communicator on the field and he has a real cool head. That has helped me enormously and it takes the pressure off me a little bit."