Carlton forward Charlie Curnow faces a significantly disrupted pre-season after fracturing his patella in an accident unrelated to football.

The star Blue will undergo surgery on Thursday after the injury mishap caused by slipping on tiles on Wednesday. 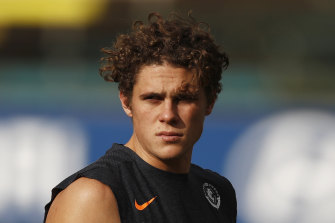 Carlton said that while the injury happened to the same knee on which he had surgery in the post-season, the fractured patella was a new complaint.

"When Curnow slipped, he produced a high-level contraction to his quadriceps muscle. This caused a large force to go through his whole knee and his de-conditioned patella did not tolerate the load," the Blues said in a statement.

"Curnow was immediately taken to hospital when the injury occurred and will undergo surgery today [Thursday]."

Carlton head of football Brad Lloyd said the accident was extremely unfortunate and the club was supporting the young forward.

"The recovery time for a fractured knee cap is typically 3-4 months. This will delay his return to running until the New Year, which means it is unlikely he will be available for our pre-season games in late-February and early-March," Lloyd said.