It won’t always be like this, but who cares when you are Hawthorn and everything clicks like it did on Saturday night?

Some nights things just work for you. You kick straight – the Hawks booted 13 goals straight from set shots. To put that in perspective, they have only once come close to that this century when they booted 14.1 against Richmond in round 21 of 2005.

You play an opposition that has lost Charlie Dixon, Robbie Gray and Orazio Fantasia from the forward line and All-Australian centre half-back Aliir Aliir. But Port was still a top four side with enough elite talent, and the most recent Brownlow Medallist in the middle, to expect to beat Hawthorn. 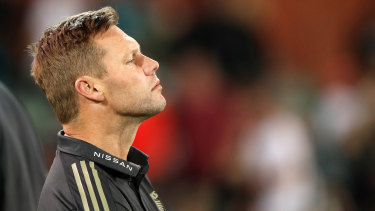 Whatever Sam Mitchell tried worked. He dropped Liam Shiels and sent a message to the team about effort, reward and reputations counting for nothing. Often when statements like this are made it is in the knowledge there will be short-term pain. There wasn’t. 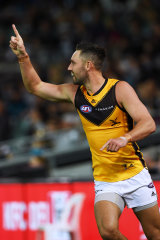 Jack Gunston is fit and in form for the Hawks.Credit:Getty Images

Mitchell has Jack Gunston and James Sicily both fit and in form.

He wanted to spread and split the Port defence and it worked. They structured to create one-on-ones deep with Trent McKenzie on Gunston so the more agile and clever Gunston could exploit the advantage and it worked. His two snaps, one on either foot from pockets either side of the goals, early on were sublime. He was the most influential player on the ground when the game was won in the first half.

It was a match where the numbers largely lied: Port had 24 more clearances, 10 more centre clearances and 12 more inside 50s. Port won the contested and uncontested possession. And yet they never looked like winning.

Why? Port also had more turnovers. That was partly on Hawthorn, partly on them. Port butchered the ball. Hawthorn were as clean as Port were dirty.

The goals Hawthorn scored running the ball out of their defensive 50 told the story of the night. Firstly, Port Adelaide beat them around the ball and scunged – yes, scunged – the ball inside 50, but they could not mark it or keep it in there. Hawthorn were able to run the ball out with clean possession.

Jack Scrimshaw was excellent behind the ball; his delivery off half-back and deep running is creative. Changkuoth Jiath’s athletic interceptions created turnovers and his run disrupted the Power. Dylan Moore linked up with hard running up and down the field as a high forward.

Hawthorn are still young, but their kids – Connor MacDonald, Denver Grainger-Barras and Josh Ward – all held their own. Ned Reeves continues to grow, at least in confidence. He is seven feet tall, after all.

The integrity of the season demanded games go ahead, the AFL said. Games will be played when they are scheduled no matter how many players are sidelined with COVID-19.

OK, West Coast had enough good players to be competitive, but that was against last year’s wooden spoon team. The league was lucky the Eagles were not drawn to play Melbourne. Next week the Eagles have a derby. The AFL will be hoping their players recover as much as coach Adam Simpson does.

Essendon delivered an immediate first quarter response to last week’s poor effort but could not sustain it. 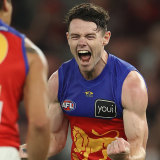 Lachie Neale had a field day against Essendon in round two – just like he so often does against the Bombers.Credit:AFL Photos

But why the Bombers chose to socially distance from the opposition’s most damaging midfielder remains a mystery.

Lachie Neale had amassed 2, 3 and 3 Brownlow votes in his past three games against the Bombers and then had a picnic against them on Saturday night – 41 touches, 12 clearances and two goals.

Essendon don’t like to tag. Last week it was Paddy Dangerfield running out of the front of the square unchecked who tore them apart. Some coaches don’t like taking one player out of a system to run with one opposition player but when that player is torching you , surely you have to consider putting more work into him.

Swans coach John Longmire sent Callum Mills to Dangerfield on Friday night and it was a commanding performance. Dangerfield had one touch for the first term. That system held up pretty well.

Some games define teams and clubs. This one did for both Richmond and GWS. No Dustin Martin, Dylan Grimes, Dion Prestia, Jack Riewoldt, Nick Vlastuin or Kane Lambert. And they won.

Yes, the Giants missed Toby Greene and Jacob Hopper, and lost Phil Davis during the match, but this was as much a victory of system over talent. Richmond folded back on their system of pressure and territory against a Giants team that played without adventure or desire to pressure and tackle the ball forward.

Noah Balta is proving a canny shift forward, especially with Josh Gibcus emerging behind the ball. The two rucks in tandem worked over poor Matt Flynn. The Giants’ attempt to use Tom Greene as an under-sized second ruck didn’t work.