Dual Richmond premiership players Shane Edwards and David Astbury are in line to return from a long absence for Saturday's final-round clash against Adelaide, on what will be a record-equalling day for coach Damien Hardwick.

Edwards featured in the opening five matches this season but has not played since, having remained in Melbourne for the birth of his now five-week-old daughter. He left the AFL transition hub this week and has rejoined teammates in full training, impressing on the track at Metricon Stadium on Thursday. 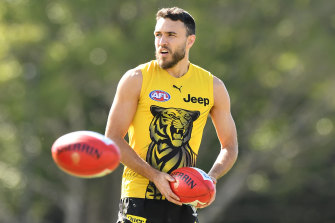 Shane Edwards is in line for a return to Richmond’s team.Credit:Getty Images

Key defender David Astbury (knee) has not played since round four and has told the Tigers he is ready for a recall while Mabior Chol will return and help out in the ruck, having not been seen since round 13. However, midfielder Shai Bolton (corked calf) will miss.

"Shane Edwards trained strongly and David Astbury trained strongly. Dion Prestia joined in some training as well today. The first two have put their hands up to play but Dion is still probably the first week of finals," Hardwick said on Thursday.

"We have got some players coming back which is really important for us."

The Tigers have already emerged as favourites to claim back-to-back flags, a push strengthened by a thinning injury list.

Edwards, a 260-game veteran, remains a crucial piece of the Tigers' plans. He brings run, carry and goal-kicking, not to mention vast experience. 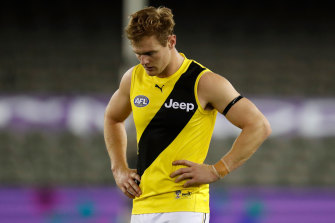 David Astbury has not played since picking up an injury in round four.Credit:Getty Images

Astbury's impending return means he joins Dylan Grimes and Noah Balta in giving the Tigers tall options in defensive 50. Midfield accumulator Prestia has not played since round five because of an ankle injury, which later became infected.

The Tigers will have to make at least two changes ahead of the Crows' clash at Adelaide Oval, for ruckman Ivan Soldo (ruptured his anterior crucial ligament and medial ligament) and game-breaking forward Tom Lynch (hamstring) were hurt in the statement win over Geelong last week.

"Our guys are really positive with Tom. His scan came back on the minor side. He is running now, doing some strength training. It's our understanding he will be available for the first week of the finals at this stage, which is a positive," Hardwick said.

"What I will say is though is that he is really positive to us and we will make sure he will be right to go – we have one chance of getting him right so we won't rush it."

While the Tigers' primary aim will be to lock in third spot on the ladder, it will be a momentous day for Hardwick, who will equal Tommy Hafey's record of 248 matches for the most games as a Richmond senior coach.

Hafey, who died in 2014 aged 82, remains one of the club's most famous names, having led the Tigers from 1966 to 1976, claiming four premierships. While Hardwick has two less premierships to date, he has also equalled Hafey in terms of taking the club to seven finals series.

"It's quite humbling," Hardwick said, praising the administrative structure of the club.

"Talking about being in the same sentence as Tommy Hafey is quite embarrassing in a way. I look at Tommy, he has won four flags and has been an incredible ambassador of not only our football club but the AFL in general."

Hafey's wife Maureen has passed on her "well wishes", with Hardwick adding it had been humbling to have received last year's premiership cup from her.

Hardwick had an inauspicious start to his coaching career, dropping his first nine matches before a breakthrough victory in the slop against the Power in Adelaide. However, improvement soon came, and he now enjoys an excellent winning clip of 57.5 per cent (141 wins, 103 losses, three draws), one that jumps to 64.6 per cent since 2013 when the Tigers took major steps toward emerging as a force.

The Crows, meanwhile, will be desperate to post what they hope will be a fourth-straight win, having knocked over Hawthorn, Greater Western Sydney and Carlton, in a bid to avoid the wooden spoon.

Time is right for Reds to end drought