West Coast coach Adam Simpson has revealed he made a recent visit to Willie Rioli in Darwin, but the club is still in the dark as to when the banned goalsneak will learn his fate.

Rioli is facing a ban of up to four years after allegedly tampering with his urine sample in August during a routine drug test. 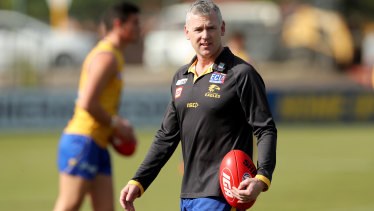 The 24-year-old tested positive a few weeks later to cannabis, but it's the allegation over tampering with the first test that might spell the end of his AFL career.

Rioli was provisionally banned just two days before West Coast's semi-final loss to Geelong. The speedy forward hasn't returned to the club since.

He's been spending time with family in Darwin and the Tiwi Islands to try to escape the spotlight.

"I went and saw Willie up in Darwin a couple of weeks ago, to see how he is," Simpson said.

"I haven't seen him since the Wednesday of the Geelong game.

"I got to catch up and see more of his family and see how he's travelling, so he's going OK.

"But nothing much has changed in the last couple of months."

Rioli has spent time training with St Mary's Football Club in Darwin in a bid to stay fit.

But with no timeline set on when his doping case will be heard, West Coast will have to brace themselves to be without Rioli for all of 2020.

Simpson says the club will map out a fitness plan for Rioli once they know more about the process. 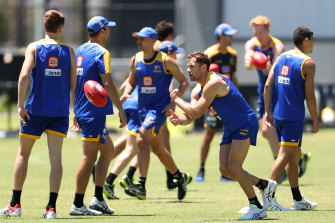 The Eagles were back in pre-season training on Monday.Credit:Getty Images

West Coast's senior players started pre-season training on Monday, but star defender Jeremy McGovern will be nursed through the summer after undergoing surgery to fix a heel issue.

"He carried it for a large part of the season and we thought rest would fix the situation. It is minor – it is not a big issue," Simpson said.

"JK [Josh Kennedy] went through a similar thing last year and the only thing is they miss a bit of training and a bit of continuity but we expect him to be right for [the first match of pre-season]."

Former Carlton and Greater Western Sydney forward Jarrod Pickett is expected to be among up to three new players who will train with the Eagles in their quest to be picked in the pre-season supplemental selection period.