Coleman medallist Tom Hawkins admits the thought of what would have happened if the minor sore throat he contracted early in the week was the forerunner of a COVID-19 diagnosis on the eve of the 2020 grand final briefly ran through his mind.

But after easing the anxiety of AFL CEO Gillon McLachlan by testing negative to the coronavirus, the 32-year-old will join teammates at Southport for their main training session on Wednesday and is certain to play against Richmond on Saturday. 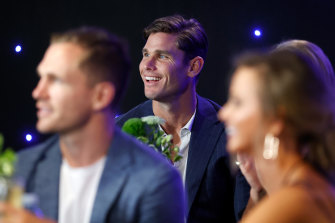 Tom Hawkins had a scare when he was isolated after reporting a sore throat earlier this week.Credit:Getty Images

"I did think briefly [about COVID-19] but the symptoms of just a sore throat were pretty isolated," Hawkins said on Wednesday. Queensland had one case of COVID-19 diagnosed in the past 24 hours and has five active cases in the state.

"There was a never a chance I had contracted COVID-19 unless I had got it off a staff member somehow, but it was a little bit laughable. I am fine now and looking forward to getting into the week.

"I might be slightly modified depending on how I go. I have had a bit of a walk around anyway, which is not dissimilar to my usual program anyway. It's just that it is in grand final week."

Hawkins said he presumed he contracted the throat infection inside the Royal Pines hub where he has been staying with his family for the past five weeks, after being with them inside the Mantra at Southport since August.

He said the protocols they have been living with all season made it prudent for him to detach from the group after attending Sunday night's Brownlow and isolate until the symptoms subsided.

The leading goalkicker knows he will need to be on his game on Saturday night at the Gabba when he plays in his first grand final since 2011. He announced himself to the football world in that game, kicking three goals in the third quarter to put the Cats into a lead they never relinquished.

He has played 197 matches since that day, winning a best and fairest, earning three All-Australians and leading the club's goalkicking in every season but the chance to play in another grand final has eluded him until the win over the Brisbane Lions in the preliminary final.

Hawkins said Saturday night's excitement was real however the group soon refocused their attention to the grand final.

"There's a feeling amongst the group that getting there is not quite good enough and that is what I have loved about the group this year," Hawkins said.

"We have had a mindset and a challenge in front of us right from when we came back."

Get your finals’ fix delivered straight to your inbox with our Real Footy newsletter. We’ll have a preview of the matches and expert tips each Friday afternoon and on Mondays, chief AFL writer Jake Niall will wrap up the weekend’s play. Sign up to The Age‘s newsletter here, The Sydney Morning Herald‘s here, WAtoday‘s here, and Brisbane Times‘ here.