South Sydney enforcer Sam Burgess has been forced out of the Great Britain squad that will face New Zealand and Papua New Guinea due to a shoulder injury.

The 30-year-old suffered a recurrence of a shoulder injury in his club's NRL preliminary final defeat by Canberra Raiders in August and set to undergo surgery in Sydney. 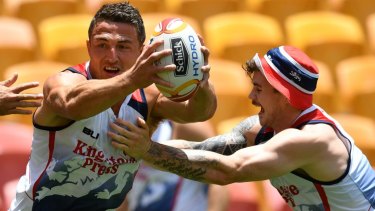 Sidelined: The loss of Sam Burgess, who will undergo surgery, is a major blow to the Great Britain side.Credit:AAP

The loss of Burgess, who made his Great Britain debut as an 18-year-old against the Kiwis in 2007, is a major blow for Wayne Bennett's team as they prepare to embark on the first Lions tour for 23 years.

"He's absolutely gutted, as are we.

"We've seen how special it is to all our players, Sam having been one of the chosen few previously who have worn the shirt and did outstandingly well in it.

"He's a leader and a real big character in that dressing room and on the field he's world class so we'll certainly miss him.

"It will provide somebody else with an opportunity and hopefully they can grab it."

The RFL announced a 16-man England squad for the World Cup Nines, with 11 players staying on for the Lions tour.

That squad will be boosted by other NRL-based players and representatives from Saturday's grand final between St Helens and Salford before it is announced on Monday. 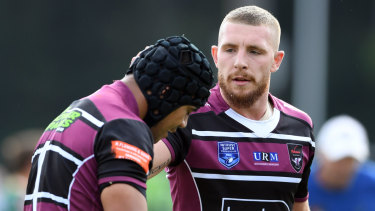 Scratched: Jackson Hastings made an ignominious exit from Manly.

Sinfield confirmed that former Leeds centre Kallum Watkins, now with Gold Coast Titans, was not selected because of a rib injury and a final decision has yet to be made on the fitness of Wigan loose forward Sean O'Loughlin, who is expected to be named captain.

The Salford halfback was born in Australia but like Warrington's Blake Austin has an English grandparent and he lodged papers to prove his qualification a week ago.

At the start of the 2018 season, Hastings was involved in a falling out with fellow Manly player Daly Cherry-Evans over the club’s infamous Gladstone strip club incident and banished to reserve grade.

"We'd have liked to have it all confirmed a little bit sooner, especially when you consider how quick Blake was," Sinfield said.

"But we understand where Jackson was at and now he's in contention like everybody else."