The Western Bulldogs have officially exited the poker machine industry after finalising the sale of their two pokies venues.

Chief executive Ameet Bains announced on Wednesday that the Melbourne Racing Club had purchased the Bulldogs’ 65 gaming machine licences at Club Leeds in Footscray and Peninsula Club in Dromana. 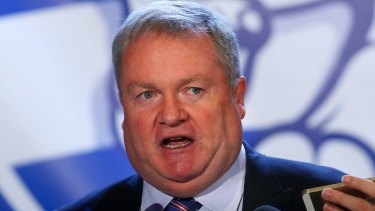 Bulldogs president Peter Gordon has been outspoken against gambling’s involvement in the AFL. Credit:Eddie Jim

Those machines generated $5.8 million dollars for the Bulldogs in the last financial year. The Bulldogs flagged their intention to exit pokies about a year ago.

Money raised from the sale will go into re-developing the Whitten Oval, the club’s football department and its community programs.

“This is a landmark moment for the Western Bulldogs – the day we officially formalise exiting the gaming industry,” Bains said.

“Everyone in the organisation has worked extremely hard to turn our balance sheet around over the last few years, working down significant debt to emerge in the best financial position we have ever been.

“With the ongoing support of the Daniel Andrews state government, the AFL and the City of Maribyrnong, we are looking forward to progressing our plans for the continued redevelopment of our home at VU Whitten Oval, transforming it into a vibrant football and community hub for the people of the west.

“With an ambitious vision to achieve 50,000 members for the first time in the club’s history, we think there’s never been a more exciting time for our army of Bulldogs fans to get on board.”

Hawthorn, Carlton, Essendon, Richmond and St Kilda are the only clubs which still own poker machines, while Melbourne and Geelong are in the process of finalising their exit from pokies.