Carlton will have discussions with the AFL and Liam Jones’ management about how they might be compensated for losing him from their list if the 31-year-old key defender returned to the game next season.

The AFL would need to adjust their vaccination policy to open the door for Jones to return, and the Blues do not want to stand in the way of him making a comeback with another club.

However, they expect to have what one club source described as “positive discussions” with the league about what might be a fair return for losing a key player of his quality to retirement for circumstances that were beyond the club’s control. 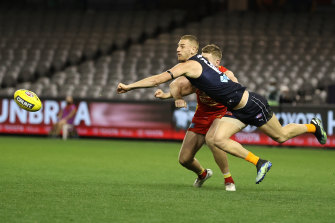 Liam Jones became one of the game’s best defenders at Carlton before retiring due to the AFL’s no-jab, no-play COVID vaccination policy.Credit:Getty Images

Jones was not retained on the active list when he refused to adhere to the AFL’s mandatory vaccination policy ahead of this season. He chose to retire in November last year after the Blues failed to convince the contracted intercept marker to be vaccinated.

When contracted players retire and negotiate a departure from their club, they agree under AFL rules to not return to play for another club for 18 months, which, strictly speaking, would make it impossible for other clubs to play Jones until after the 2023 mid-season draft.

However, Carlton will be comfortable with Jones returning for another club next season through the national draft or exchange period if eligible provided their position is recognised. They do not intend to re-recruit him and have made subsequent list decisions since the key defender’s retirement such as recruiting Sam Durdin in the mid-season draft on the basis Jones would not be available for 18 months.

This could mean the Blues are given a pick within the draft or a trade is facilitated ahead of the draft with any club that picks up Jones. Although such details are yet to be discussed a source familiar with the situation said the dialogue between the relevant parties was positive.

At the time of Jones’ retirement, the Blues lobbied the AFL to use a pick at the back end of the draft to fill the vacant spot Jones’ departure had created. However, the league denied their request as the second list lodgement had already passed and special consideration was not granted.

Essendon list manager Adrian Dodoro had an informal chat with Jones in Queensland last week and clubs are monitoring his progress in the expectation that the AFL will not mandate for players to be vaccinated against COVD-19 to play in 2023, a policy that remains uncertain at this stage.

Industry sources said Jones is keen to return and has been playing well for Palm Beach Currumbin in the QAFL but AFL clubs are yet to make a definitive pitch for him just yet.

The Lions sent a round-three pick (No.43 at the time of trade) and a round-five selection (75) to the Hawks for Luke Hodge and their round-three choice (44) when the champion Hawthorn player came out of retirement to play the next year. Hodge wasn’t contracted when he retired and the club were happy for him not to play on.