Multi-talented Cat Mark Blicavs would love state of origin football to return to the AFL calendar on an annual basis.

Blicavs' only previous experience wearing the Victorian colours came in his former sporting life as a distance runner and steeplechaser. 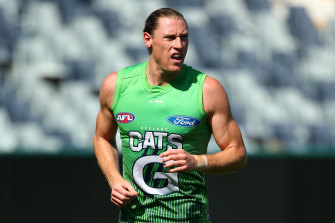 Gelong’s Mark Blicavs would like to see state of origin return to the AFL calendar on a regular basis.Credit:Getty Images

The two-time Geelong best and fairest winner could very well find himself matched up against Cats teammate and spearhead Tom Hawkins in the February 28 clash between Victoria and the All-Stars at Marvel Stadium.

Although the primary purpose of the match is to raise funds for victims of the devastating bushfires earlier this year, Blicavs fully intends to take the contest seriously.

"It's a massive honour honour and I'd like to see state of origin as something that happens each year," the key defender told reporters on Wednesday.

"I think the rugby league guys do it phenomenally and it's a big day in the calendar."

Regular AFL state of origin clashes ended in 1999, with lack of of interest from many of the leading players of the day a major factor in the demise.

The most recent representative fixture was a one-off game between Victoria and a Dream Team in 2008 to celebrate the 150-year anniversary of Australia's indigenous football code.

Blicavs has not given much thought into where origin could potentially fit into a crowded AFL schedule, although he loves the mid-year slot used in rugby league and the passion it creates between NSW and Queensland.

"Whether the AFL put in another bye week and just get the players to buy in," he said.

"There could be injuries but that's the risk you take.

"If they made it that prestigious event where it is an honour and people want to be selected, it's something you're ready to play for.

"Obviously the players and all the coaches need to buy in on that.