Anatomy of an Origin miracle: The manoeuvres behind Hunt’s magic moment

Ben Hunt just hoped his “little pig trotters had the distance” as he ran toward Caxton Street and the prospect of never buying a beer on Queensland soil again.

Consider his 78th-minute, 75-metre sprint into Origin folklore the last and finest show of Maroons manoeuvring that had NSW beaten at every turn.

Hunt’s match-winning play – a charge-down turned opportunistic snaffle of Nathan Cleary’s gamble on a chip kick – came because the Blues’ main man simply “had to try something”.

“I called it with Teddy (skipper James Tedesco),” Cleary says of the fateful dice roll.

“There was a minute or two left to go and I didn’t know if we were going to get another shot. We had to try something and it wasn’t executed well enough.

“Benny Hunt, that was a very big play and that’s just how it goes sometimes. We just couldn’t come up with the right play.” 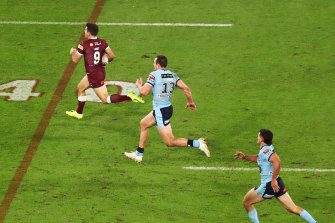 As close as he’ll get… Isaah Yeo tries in vain to keep up with Hunt on his way into the history books.Credit:NRL Imagery

Everything else Cleary and NSW had trotted out, Queensland had an answer for; the summation of a slow, cumbersome death by a thousand Daly Cherry-Evans kicks.

With a leaf taken from the tactical books of rugby union, where kicks early and long prioritise territory as much as possession, the Maroons pinned NSW in their own half almost exclusively from the 55th minute.

Cherry-Evans finished with 642 kicking metres from 19 punts, on occasion even launching a long-range effort on the second tackle to turn the Blues’ back three around and nullify their all-important running game.

Queensland didn’t mind if NSW had ball in hand as long as it was at their own end, with panicked mistakes from Jarome Luai, Stephen Crichton and Siosifa Talakai giving the Maroons the best of both worlds.

So when the Blues did finally work their way back up-field while trailing 16-12 the added defensive efforts took their toll, Queensland duly having their measure as the stakes increased by the second.

Here’s how those frantic final moments and the catalyst of a miracle Origin play panned out.

74.03: After NSW finally start a set somewhere other than their own goal line, Damien Cook and James Tedesco are sniping around the ruck to have Queensland back-pedalling.

Cleary’s last-tackle bomb is missed by all as it comes down 12 metres from the try line, Jake Trbojevic of all people following up with a grubber. Tom Dearden covers it with no NSW chasers in pursuit.

76.04: After a grinding Queensland set the Blues are again in decent field position and load up with a right-side shift.

There’s time, space and an overlap out wide, but Isaah Yeo plays short to prop Jacob Saifiti and Dearden is able to bring him down. Cleary’s bomb back across field is taken by Gagai with the chasers five metres away from being able to challenge him.

77.01: With the Maroons again battling for yardage, Cherry-Evans kicks long and low for the touchline. Daniel Tupou cuts it off but is belted off his feet and into a slow play-the-ball by Tino Fa’asuamaleaui.

77.45: The Penrith connection swings into gear to create another overlap down the right through Cleary and Yeo. But a critical read from Corey Oates sees the veteran winger flying in on Stephen Crichton who is turned back inside toward Queensland’s cover defence.

78.02: The miracle moment. Cleary takes the ball 32 metres out on the last with 10 metres between him and the defence.

NSW has five players lined up outside on the left to Queensland’s four defenders because Gagai is already sat back deep in anticipation of another bomb.

Cleary goes to the line as Hunt pushes across to pressure him. Luai is on Cleary’s outside, Tedesco on his right, both ready to pursue the chip kick that comes once Cleary steps back sharply inside for the all-or-nothing play.

Hunt clutches the ball as it comes off Cleary’s right boot. He’s going for the charge-down but critically, never takes his eyes off the Steeden.

When Cleary delivers a deft rather than hefty touch, Hunt is airborne but latches on with both hands.

He lands, pivots, and takes off with only Yeo anywhere near him. Just 75 metres – “80” he was already correcting observers in the sheds afterwards – between him and a slice of Origin history.