AFL finances not expected to be back to ‘normal’ until 2024

The AFL has projected that the competition will be about $200 million down on revenue in 2021, compared to the pre-COVID-19 environment of two years ago.

But the AFL also says the competition – which includes all 18 clubs and the AFL itself – should be back to normal revenues in 2024, meaning the estimate is that the recovery from the pandemic will take almost three more years. 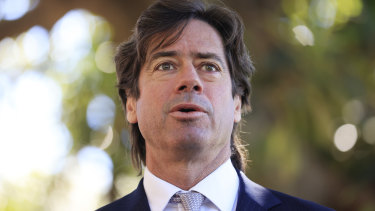 AFL chief executive Gillon McLachlan outlined some of the projections for the game’s finances at a meeting with club chief executives on Tuesday. Credit:Getty Images

The AFL’s prediction to clubs, based on estimates for this year, was that clubs and the AFL would “break even” overall in 2021, with revenue down around $200 million compared with 2019, and with costs reduced heavily to prevent the clubs and competition from running up a debt.

The AFL did not run up a massive debt in 2020 at the height of the pandemic, but the league exhausted its cash reserves, while the clubs’ financial positions varied significantly.

The competition – counting the positions of the 18 clubs – suffered a $600 million reduction in revenue last year, prompting massive cuts in spending that have forced huge job losses at clubs and in the second tiers of the game.

The estimated reduction in revenue from 2019 to this year of $200 million was due to reductions across most areas – crowds/gate revenue, membership yields, sponsorship, and some broadcasting revenue as a result of a re-negotiation with Foxtel and Seven.

The AFL has taken a conservative position on debt during the pandemic, choosing to cut spending at clubs and in the running of the game, rather than accumulating a heavy debt to their banks. In practice, this policy has meant the burden of cuts has fallen heavily on football club staff.

While the AFL is yet to announce the amount that clubs will be allowed to spend under the “soft cap” on football departments next year, competition sources said it was unlikely to reach $7 million – a round figure that some clubs had hoped possible. Once capped at $9.7 million, the soft cap is only $6.2 million this year, with clubs taxed heavily if they exceed it by a reasonable amount.

The AFL also has to strike a new pay deal with the players for 2022, having reached an agreement in which players lost nine per cent in wages compared with what had been agreed upon before the pandemic. This included a reduction in the size of club lists.

Several clubs are counting on a restoration of a full salary cap for players, having factored that into their negotiations – and deferred payments – to their players.