Ablett and Dusty: behind the great unknowns

Whatever happens in the first grand final played at night and outside of Victoria and Gary Ablett jnr's last game, Ablett, a dual Brownlow medallist, five-time players' choice as most valuable player and twice a premiership player, is destined to be an official AFL legend.

Whatever happens in this surreal Gabba grand final, Dustin Martin, a two-time Norm Smith medallist, Brownlow medallist, twice a premiership player and finals player nonpareil since 2017, is ascending to a similar station as Ablett, whom teammate Zach Tuohy this week called "a God'' of the game. 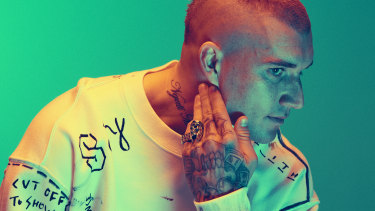 They are very different men – "Gaz'' a committed Christian, father, husband and cleanskin who likes only a quiet glass of red – while Dusty lives alone in Port Melbourne, hangs with Dane Swan on American post-season siestas, has a hedonistic streak and sports a neck tattoo.

Yet, Dusty is as disciplined as Ablett in his own way: ex-Tiger teammate and mentor Matt Thomas, a consummate professional and battler, turned Martin on to a low-carb, higher-protein diet – avocados replacing take-away – and improved training regime in 2014-15. Thomas said that Martin's preferred drink was vodka and sodas, because of ''lower calories''.

Ablett is a son of Geelong and Torquay, a quintessential local hero, who was raised in a smaller goldfish bowl; Martin, while reserved, has a touch of Vegas/Hollywood – Serena Williams is an acquaintance – and plays like the competition's Clint Eastwood: a silent destroyer.

But Ablett and Martin have striking parallels, too, as champions within teams that have built empires, as sons of larger-than-life fathers who found very public trouble, as players who did not unleash the full arsenal of their talents until well into their careers, as players who rose on the back of critical club reviews and transformations and vice-versa.

Above all, they are deeply private champions, who have fenced off the media and public from their inner lives, from traumas and tribulations they have endured.

The fend-off, Dusty's signature move on field, is an apt metaphor for how he handles public attention, as The Age's Greg Baum observed back in 2017.

And they are implacable on field, showing little emotion even after a spectacular goal or passage, low-key and not easily distracted: their focus is the ball, not opponents, not the scoreboard, not the crowd.

"They're low key in everything except in the way they play,'' said Neil Balme, the veteran official at Richmond (since 2016) and Geelong (2006-2014), and one of few football people who's dealt with both Ablett and Martin. Balme famously flew to New Zealand in 2017 to meet Dusty's father Shane, a former bikie, whose visa had been cancelled in 2016 by Peter Dutton, citing his criminal record and links to the Rebels bikie gang. Balme's flight was an entre to signing Martin on a seven-year deal.

Martin seldom does media interviews and isn't comfortable in that forum. Ablett is more engaged and does media duties for his club, but the life that we find most intriguing – the shadow of his famous and troubled father, tragedy of his sister Natasha's death, the challenge of his son Levi's illness that forced him to leave the club's Queensland hub – has been, respectfully, placed out of bounds.

On Monday, Ablett fronted the smattering of footy media who have been transported to Queensland. Polite, smiling and affable, he fielded questions on his last game, future and legacy, but those who were there had been fore-warned – politely – that Gary wouldn't be discussing his family.

Martin and Ablett, in different ways, are unknowable champions, keeping us at bay by different means: Martin deploys the metaphoric fend-off, while Ablett accepts contact, but never gets caught.

Wes Cusworth taught Gary Ablett in year 10 at Christian College in Waurn Ponds, remembering Gary as a talented junior basketballer who loved the NBA and who craved a sporting career. Cusworth, though, never imagined that Ablett jnr, the son of the AFL's most electrifying footballer, would become what he did.

Cusworth, a former journalist, knew Ablett's father from the congregation at the Church of Christ at Manifold Heights. Ablett junior's Christianity was described to me as "evangelical'' but not strictly denominational.

It is telling that Ablett selected Cusworth to ghost Ablett's forthcoming autobiography, which contains, surprisingly, contributions from the now semi-reclusive Mark "Bomber'' Thompson – the coach with whom Ablett had some issues in 2010 when they both exited the Cats – and his father, along with Joel Selwood, the Geelong skipper. 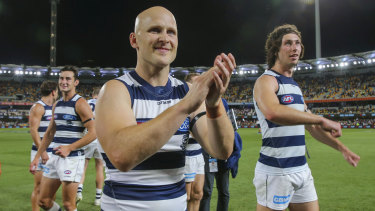 In the book, Ablett addresses some of his private challenges – notably the death of his sister – but does not discuss his son Levi's illness this year (the book was written before he came back to the hub), nor his father's travails, the most troubling of which – the death of 19-year-old Alisha Horan from a drug overdose in Ablett snr's company in 2000 – has meant that the elder Ablett, a clear-cut AFL legend based on his feats, has been withheld that honour.

To those who know Gary Ablett jnr well, his reticence and small circle of trust are completely understandable, and based on a desire to protect his family. But Cusworth does not feel that wearing the Ablett surname – and his Christian name – has weighed as heavily on young Gaz as many of us have assumed.

"I don't think it was that much of a burden for him,'' said Cusworth, who reckoned Ablett was motivated somewhat by "proving people wrong'', adding, "he's his own man.''

As with many great players or athletes, Ablett is meticulous and self-focused – highly aware of his body, diet (organic), sleep and hydration, as his business partner Sean Tobin noted. If he was not a natural leader – Geelong people didn't think him suited to captaincy when he was appointed at Gold Coast – the view of Suns' insiders of that time was that he set standards and worked well in one-on-one situations rather than as leader of the pack, Luke Hodge-style.

But many attest to his generosity, most evident in 2016 when Ablett paid for the funeral of Suns staffer Harley Hollands' wife – Hollands having worked with Ablett in community projects on behalf of the club – and for another staffer to fly to New Zealand to see his family after the birth of a child.

In assessing these generational footballers, one ex-teammate of Ablett observed that both Geelong and then Richmond had transformed how they played when Ablett, then Martin a decade later, vaulted from very good players to the game's best over the course of a summer.

Ablett's well-documented epiphany of 2006 followed 360-degree feedback from teammates – via the Leading Teams program – in which then 22-year-old Gaz was told that he needed to train harder to become his club's Chris Judd.

Geelong of 2006 and Richmond of 2016 had undergone forensic reviews of their under-performing football operations, in which Thompson and Damien Hardwick were retained, but the game styles changed to more direct methods – along with football department bosses; in both cases, Balme was installed.

Martin did not ascend to superstardom until 2017 – coinciding with Richmond's review and Hardwick's change of lieutenants and, critically, of Dusty being redeployed as a forward-of-centre midfielder/forward, where he was weaponised. Richmond's revolution, thus, was as much responsible for Martin's great leap forward as vice-versa.

To Matt Thomas, imported from Port Adelaide and then encouraged to mentor Dusty, Martin's improvement in professionalism was evident in 2014 and 2015, when the pair would box together after every training session, and Martin began to focus on recovery; today, Thomas says Martin still does visualisation and meditation in the mornings and probably sees a chiropractor twice a week.

If Martin still liked a drink in '14-15, Thomas said "he was more professional with when he did it and how often and it was (more) structured'' – vodka sodas when they went out, not beers. He began to spend more time in recovery at the beach, paying, in Thomas's words, "a lot more respect to his body.'' While quiet, "he always asked a lot of questions. He actually listens.''

Dusty, 29, has another four further years on his estimated $1.2 million-a-season contract. If he declines, Richmond's seven-year deal has already paid for itself. His skipper and close friend Trent Cotchin said Martin wouldn't care for where others placed him in the AFL world, only for "the respect he has from the people he loves most''.

Ablett's immediate future, post-Saturday night, is unlikely to be in football or media, according to his manager Liam Pickering. The expectation is that he'll turn to his businesses first. Tobin and he have two – Exclusive Insight, an unfiltered platform for athletes based on LeBron James' Uninterrupted – and Active Vacay, which offers 20 souls the chance to train with Gaz in Queensland.

Pickering says Ablett was absolutely serious when he told the Suns that he would retire if he hadn't been traded back to Geelong, in what was a 50-50 split between family and the wish for a flag. "If they hadn't have traded him, he would have retired.''

For the mercy that a Queensland entity granted Ablett and football , we should all be grateful.