Harley Bennell hopes to be back in full training next month with Melbourne as he attempts to revive his ailing AFL career.

The troubled former No.2 draft pick began training with the Demons this week in a bid to win a spot on the club's list during the pre-season supplemental selection period. 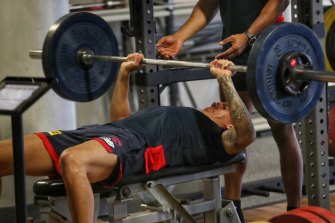 Harley Bennell on his first day training at Melbourne.

"But I'll back 'Burgo' in, I'll back the medical staff in here and it's really exciting times ahead."

Former Gold Coast and Fremantle star Bennell managed only two games in four seasons with the Dockers – both at the end of 2017 – before being delisted this year.

He has been given no assurances by Melbourne, who this week signed former Essendon and Geelong player Mitch Brown under the supplementary selection period rules.

"[I just have to] stick to the program really," Bennell said.

"I like things straight away, but I'll just take my time slow and steady here.

"But I can't wait to get the ball rolling."

Despite his well-publicised injury woes and off-field drama, Bennell said he never contemplated quitting the game.

"I never thought of giving it away, I just needed some time away from football," Bennell said.

"I was lucky enough that [infant daughter] Carter came at the right time. It was just a blessing.

"We've got some great people around us that can help lead us in the right direction and I'm really excited for the time that Melbourne have given me."