2020 hindsight: how the AFL found a way through the season

Oddly enough, it was the moment an AFL player tested positive for COVID-19 that inspired chief executive Gillon McLachlan to believe the 2020 season could and would be completed against the odds.

It was late June. Round two had just been played, 11 weeks after round one. Now Essendon’s Conor McKenna returned a positive swab, forcing him to isolate and the Bombers' game against Melbourne to be postponed. 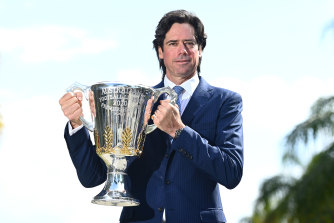 There was argy-bargy. The clubs were reportedly eager to play round one, McLachlan hesitant. "What I'd say is that there was a difference of views across the industry – and great collaboration, too," he said. "Diverse input meant good decisions."

Neither then nor since has a dissenting voice been raised, unusual in footy's hyper-world. Evidently, this was too grave for grandstanding. "I believe our industry keeps secrets in-house when things are important," McLachlan said. "I think the more frivolous things get out."

This was now full-blown crisis management. Parallels between the AFL and government are plain to see. The furloughing of staff meant that fewer people were involved in the AFL's decision making. "In some ways, it was simpler," said McLachlan. "The efficiency was a help." But it was stressful, too. It wasn't a war cabinet, but there was little peace.

Our industry keeps secrets in-house when things are important. The more frivolous things get out.

"That's proved to be true. I don't want to run ahead of ourselves, but I feel we've done our bit to get a lot of people through this very tough period." By we, he means not HQ, not even temporary HQ, but everyone in the game.

"A word that was put into our lexicon very early by [then chief federal health officer] Brendan Murphy was 'proportionate risk'," McLachlan said. "It was an articulation that stuck with us. [It was] health and wellbeing as a priority, but [there was] also the game, and the economy of it, and the impact on so many Australians. We had to get going."

Throughout, the AFL was working within ever-shifting and mostly tightening restrictions. Victoria's infamous second wave, a surge in NSW and an understandable fortress mentality in WA, Tasmania and SA meant that the options kept shrinking and the competition kept contracting … towards Queensland. It's not really footy's heartland, but it became the game's high ground. Marooned, footy turned to the Maroons.

"When the walls were closing in, Premier [Annastacia] Palaszczuk saying, 'Yeah, come', and then announcing it in parliament within the hour," said McLachlan, "that was a huge moment. Without that, it would have been very difficult." It also made a Gabba grand final all but inevitable.

This was Plan B, maybe C or D. The AFL did have one last contingency plan. "The bail-out option was to go into very hard hubs," McLachlan said. "We could have gone into complete lockdown in jurisdictions. It just would have been much more difficult.

"In Queensland, obviously, players were on strict protocols, but they could still go for a takeaway coffee, get outside, go for a run outside the hotel compound. It's meant the four months have been easier than they would have been. We always felt there was a way through, but it's been better than it could have been."

The AFL offered a boost to the Queensland economy – thousands of people, hundreds of thousands of bed-nights – but posed a risk, too. In the ceaseless swirl of matches and people, and remembering there were games also in Adelaide, Cairns, Darwin and Alice Springs, and a satellite hub in Perth, it must have felt to McLachlan like trying to herd livestock in his boyhood station upbringing, but without a dog or bike.

'They’ve nurtured the game, and I feel the game has nurtured them, in this really terrible year.'

There were transgressions at at least nine clubs, incurring fines and suspensions of up to 10 weeks for Richmond pair Sydney Stack and Callum Coleman-Jones. McLachlan admits it tried the goodwill of the Queensland government. "Generally, our players have been great. I'm incredibly proud of them," he said. "But I'm not saying there weren't times when it got a little bit tense at the end."

Most recently, Palaszczuk has been campaigning for re-election in a poll due next weekend, so could not afford even a moderate setback in hosting the refugees of the AFL. "That has created additional pressure," McLachlan admitted.

For most footy people, most of this season, home has been where the hub is. They've been isolated far from wider family and friends, who in Victoria are still remote from each other.

But hubs also are cocoons. The single most jarring note in the whole complex exercise has been the way some footy people have presented as though imprisoned to fans who really are in solitary confinement. Belatedly, this dawned on some, and the messaging changed.

Besides, at some clubs, hub life tightened bonds and sharpened their sense of mission. You have to think that partly explains why for the first time in nearly a decade, there are two Victorian teams in the grand final.

McLachlan said he marvelled at how the footy world has risen together to this unprecedented challenge, no matter how onerous it became. This includes fans. TV ratings are up 20 per cent, which was predictable because TV has been the only way for most to watch games. But the AFL sold 30,000 memberships after the season was suspended, 30,000 tokens of solidarity. Again analogous to government, people were voting for Town Hall, a rarity.

"They've created this virtuous circle," McLachlan said. "Everyone has bought into this season. They've nurtured the game, and I feel the game has nurtured them, in this really terrible year."

Inescapably, this season has come at cost. There will be $150 million fewer TV dollars in the coffers in the immediate future, and the hubs themselves have cost around $60 million. The competition will be smaller, leaner and more brittle.

But there is upside. McLachlan said he imagined two lasting legacies from a surely unique season. "One is that we can be truly collegiate and collaborative as an industry," he said. "And we can be greater for it.

"The other legacy is we can be more agile. We can make decisions quicker. We don't need to set everything in stone for a year in advance. We can move much faster and the sky doesn't fall in." Even if tropical rainstorms sometimes made it look that way this year.

That's not to say there haven't been a record number of white knuckles and sweaty palms this year. McLachlan has been reluctant until now even to address an end-of-season review for fear of tempting fate, calamitously. Soon after speaking to The Age, it emerged that Tom Hawkins had skipped Geelong training because of a cough, and the jitters could be felt all the way up and down the eastern seaboard.

Personally, McLachlan has done it hard, but no harder than everyone else, he says. Once, for a moment, he wondered if he himself had COVID-19. Haven't we all?

Now, though, the sweat he wipes off his forehead with the back of his hand is merely Gold Coast mid-morning humidity. "There were certainly moments when I felt this was very hard," he said. "But no matter how bad it got, I always felt we would get there. Finishing by October 24 would always have been my best-case scenario."

And here it is, and here – blinking either in disbelief or because of the Queensland sun – is the grand final.