A fired-up David Gallop has taken aim at Melbourne, declaring the club's latest claims about being railroaded into accepting their devastating salary-cap penalties in 2010 were "100 per cent wrong".

Gallop also said any credit given to a few former Storm directors who co-operated with the NRL at the time was now "wiped out by their later backflip". 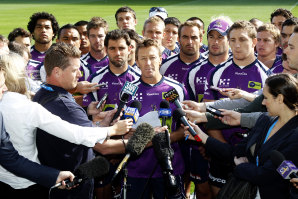 Craig Bellamy reads a statement in front of Melbourne players in April 2010 after the cap penalties were announced.Credit:Paul Rovere

The former NRL boss went even further, saying: "These Storm people should consider how tarnished the entire sport would be if they kept those trophies."

The Herald exclusively revealed on Saturday that two former independent Melbourne directors, Rob Moodie and Peter Maher, were preparing a submission for the NRL to have their sensational salary cap penalties re-examined after they had received legal advice that the governing body "did not follow its own rules" on the matter.

It came in the same week that Cameron Smith took aim at Gallop in his autobiography, The Storm Within, claiming the players were "hung out to dry by the boss of the game". 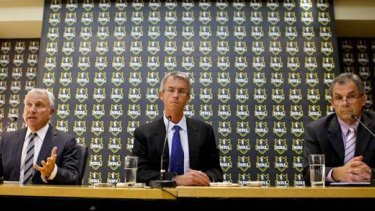 The Storm were found to be $1.7 million over the cap for a period of five years (later found in a Deloitte report to be $3.17 million) and were stripped of the 2007 and 2009 premierships, three minor premierships, handed a $500,000 fine, ordered to return $1.1 million in prizemoney and not allowed to compete for competition points for the remainder of the 2010 season.

As part of their submission, Moodie and Maher said they had legal advice that the 2010 sanctions were rushed through without issuing the club with a breach notice and giving it five days to respond.

“We went up for shoplifting and we got done for murder,” Moodie told the Herald on Friday, in reference to the April trip to Sydney where the club quickly learnt its fate.

Gallop reacted angrily to the Storm's claims, telling The Sun-Herald on Saturday: "Of course this latest attempt to criticise the process is also 100 per cent wrong and simply ignores the fact that they completely agreed to the process being truncated. 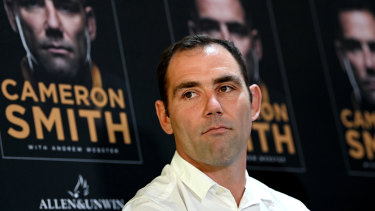 "In fact, Moodie requested it. He was the chairman and fully understood what [penalties] they were agreeing to.

"The notes from that day are comprehensive and record Moodie saying something to the effect of, 'I am appalled that the club has done this … we are here to get it dealt with'.

"Any credit they got for fronting up at the NRL and co-operating is now wiped out by their later backflip.

"The penalties were tough because they had to be. These Storm people should consider how tarnished the entire sport would be if they kept those trophies."

"The only reason we agreed [with the sanctions] was because we were constantly told by Ian and David there was no other alternative."

The Storm's penalties were revisited by former NRL integrity chief Nick Weeks in 2016, but after a review they remained in place.

The Eels were found to have been operating above the cap for several years, including 2016 when they were $570,000 over. They were later fined $1 million, lost 12 competition points, had five officials deregistered and were stripped of their 2016 Auckland Nines title, including the prizemoney attached.

Then NRL boss Todd Greenberg said he was mindful not to come down too heavily on Parramatta, as the governing body had done previously with the Storm.

"I watched Melbourne Storm fans and players have to continue to play a season without the ability to accrue points – I thought that was soul-destroying, both for the players and the fans,"Greenberg said at the time.

Parramatta star Nathan Hindmarsh was in the Eels team that lost the 2009 grand final to Melbourne but, like many people in the game, he said he had moved on from the scandal.

"I must admit, I use it as a running joke on The Matty Johns Show how Melbourne cost me a chance to win a grand final. But we cost ourselves to win one in 2001.

"Melbourne were given a penalty that the game felt was sufficient.

"There would be no point [giving Parramatta the trophy]. We didn't win it on the day. It would be meaningless for me. Fans might think differently, but that's just me."

Comparing Mahomes and Brady has become disrespectful to the Chiefs QB, stop it