The website Grande Prêmio published video late on Thursday – apparently filmed last year with Piquet speaking in Portuguese – in which the 69-year-old Brazilian used homophobic language to say the British driver wasn’t focused to challenge Mercedes teammate Nico Rosberg for the 2016 title, which the German won. There was also a fourth instance of a racial slur about Hamilton. 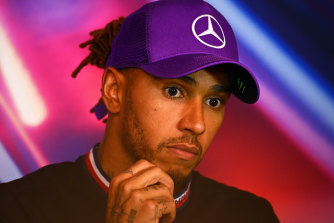 For earlier slurs that came to wider attention this week, Piquet has already been widely condemned by F1, drivers, teams and governing body, the FIA.

On a podcast last November, Piquet discussed a crash between Hamilton and Max Verstappen during last year’s British Grand Prix. Piquet referred to Hamilton as “neguinho” in Portuguese. The term is not necessarily a racist slur in Brazil, but it is an expression that is increasingly seen as distasteful, and its phrasing can also emphasise that.

Piquet apologised to Hamilton on Wednesday, but said the term, while “ill thought out,” was not meant to be offensive. He added “neguinho” can be used as a short for “people in general”. But his phrasing in that part of the video left no doubt he was singling out Hamilton, to which he added a homophobic slur.

Piquet’s spokesman did not comment about the video published late Thursday after a request from the Associated Press.

There was no immediate response from Hamilton or Verstappen to the Grande Prêmio footage.

Piquet was suspended on Thursday from his honorary membership of the British Racing Drivers’ Club, which owns and runs the Silverstone track, the site of this week’s grand prix.

Hamilton has called for “archaic mindsets” to change. After former F1 boss Bernie Ecclestone defended Piquet on British TV, Hamilton questioned why “older voices” are given prominence in F1.

Series leader Verstappen, who is in a relationship with Piquet’s daughter, Kelly Piquet, said on Thursday that Piquet used a “very, very offensive” word to describe Hamilton but he did not believe Piquet to be a racist.

Piquet, the F1 champion in 1981, 1983 and 1987, has divided F1 fans in Brazil for continuing to disparage fellow Brazilian star Ayton Senna, and questioning his sexuality without proof.

Senna, a hero of Hamilton’s, was killed in a crash in 1994 at the San Marino GP. Still, Piquet has made homophobic references to Senna, most recently in a 2020 interview.

Piquet has also angered F1 fans for his staunch support of far-right Brazilian President Jair Bolsonaro. Piquet supporters have said on social media that the recent video of Piquet has gone viral as part of a political smear campaign against the president.