The Doctor had a weekend to forget at the Spanish Grand Prix in Jerez.

He started at the bottom end of the grid in 13th having failed to make the cut on Saturday for Q2.

It was a tough start to the weekend considering his impressive second-place finish at the Circuit of The Americas three weeks earlier.

Rossi battled in Jerez and managed to finish in sixth spot but didn’t look in the same class as Marquez.

The 40-year-old, however, says if Marquez slips up like he did in Austin, then he’ll be ready to pounce.

He told GPone: “I’m nine points from Marc, but only because me made mistakes in Texas, [or] else he’d have already won three races.

“He’s definitely the strongest and to fight for the title we need to start winning races.

“Having said that, anything can happen in MotoGP – things change quickly.

“Right now, we need to take it day by day, focus on Le Mans and try to be competitive right away.” 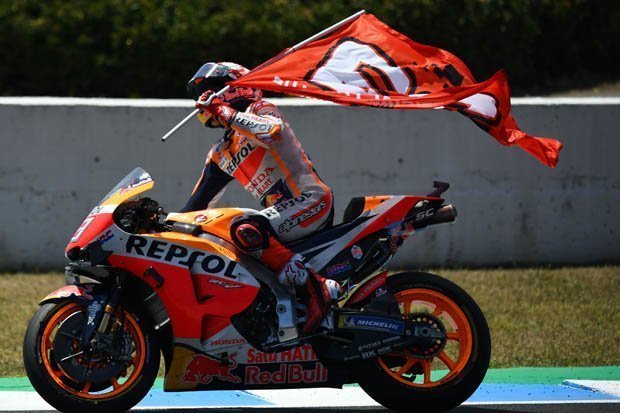 Rossi and Yamaha were busy testing in Jerez earlier this week before the next race at Le Mans.

Team director Massimo Meregalli says it’s a case of marginal gains for Yamaha as they look to improve the M1’s performance.

“We have found some small improvements that can be used for the next GP in Le Mans,” Meregalli said.

“In all honesty, we expected something more significant but, in any case, another step was taken,” he said.

“We will try new updates at the next test in Barcelona.”