The odds appear stacked against Hinchcliffe and Rossi after they snapped up a Bathurst wildcard entry offered by Holden heavyweight Walkinshaw Andretti United. 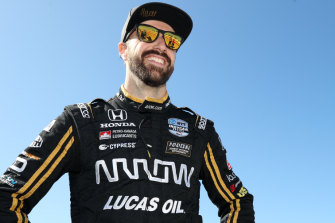 Hinchcliffe last got behind the wheel of a supercar in 2012 on the Gold Coast, while Rossi has never raced in the category, let alone seen the notorious Mount Panorama track.

And alarm bells seemed to be ringing for the IndyCar stars after it emerged Rossi ran off track at supercars testing at Winton last week, cutting short their three-day session by 24 hours.

But 2014 Bathurst champion Mostert said he had seen enough at Winton to suggest rivals will be nervous when the pair combine at Bathurst for the first time this week.

"I saw them whizzing around and braking where you want to be braking and not looking like they were having any problems," Mostert told speedcafe after watching their testing session.

"You can't really count those guys out. They're going to be in the mix, there's no doubt about it.

"The experience these international guys are bringing there, they've been in high-pressure situations their whole career. They could definitely be the dark horse, [cause] the upset there for sure."

Hinchcliffe and Rossi are bona fide stars in the US.

Rossi first came to prominence by claiming the famous Indianapolis 500 in 2016 as a rookie, while Hinchcliffe has such a high IndyCar profile he has earnt a spot in US TV's Dancing with the Stars.

While the pair may be largely unheralded to the casual Australian sporting fan, former IndyCar driver and current supercars star Simona de Silvestro expected all that to change at Bathurst.

"I think they will do pretty well. They're in a good team and they have a lot of race craft, both of them," said de Silvestro, who raced against Hinchcliffe full-time in IndyCars from 2011-13.

"So I think in the race they will be quite strong because they're not going to do anything silly.

"Getting used to a supercar is something a little bit different but I think Bathurst is actually the best one to get into because it's a bit more flowy – I'm sure they are going to have a lot of fun."