Villeneuve picks sides between Russell and Wolff in Mercedes dispute 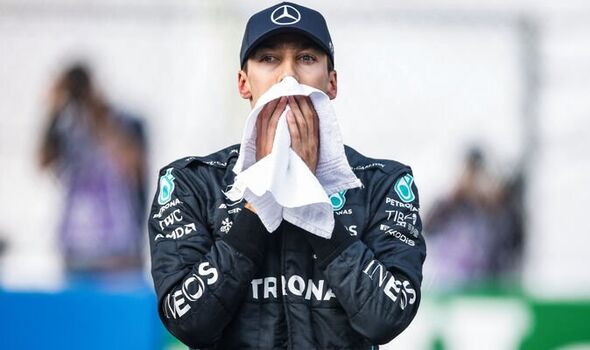 Jacques Villeneuve has backed George Russell over his unsuccessful battle with Mercedes to change tyres at the Mexican Grand Prix. Russell could be heard becoming agitated on the team radio and insisting that he wanted to stay on medium tyres to keep up with Red Bull ace Max Verstappen.

However, Mercedes told Russell that he would be switched to hard tyres, with Toto Wolff claiming that he expected Red Bull to make another change soon after. But that never happened and the Mercedes star was frustrated by his team’s strategy.

Former Formula One champion Villeneuve has backed Russell, claiming that Mercedes were too defensive in their approach to taking on Verstappen. The Canadian has insisted that the 24-year-old had ‘nothing to lose’ and should have been allowed to continue on softer tyres.

“For years Mercedes has had the best car and they have never really been cornered. They were defensive on Sunday, where Red Bull was aggressive and went on the attack. When you defend, your choices are never decisive and you only win when the other makes mistakes,” Villeneuve wrote in his formule1 column.

“In the first half of the race it was clear that the soft tire survived despite the full tanks and a green track. It has been the case for fifty years that as the race progresses you get lighter and the track gets more grip. So I was surprised by the choice for the hard tyre.

“Lewis Hamilton still had speed, so why not? But for George Russell the frustration was great: he asked several times to continue driving and go for the soft tyre. He had nothing to lose anyway.

“Everyone could see what Ricciardo was doing on the mediums, that was clearly the right compound. Maybe the Mercedes team should just watch television instead of all their computers.

“Red Bull won the race by starting on the red tyre, Verstappen was not bothered by the dirty air and despite a difficult-looking car drove very strong to win.”

It appears that Russell won his argument with Mercedes chief Toto Wolff, with the Austrian later admitting that the strategy was a mistake. “We didn’t think that the medium would go to the end, so we just got it wrong,” Wolff told Sky Sports.

“We discussed whether the soft and the hard was a viable one stop strategy and we thought it was never going to go so soft medium wasn’t even on the radar.”

Russell finished fourth in Mexico, with team-mate Lewis Hamilton coming second. Champion-elect Verstappen won for the 14th time in 2022 – a record for a calendar year.