‘Courage or mere madness’: Relive the story of Niki Lauda’s return to racing just 40 days after the crash that left him badly burned and nearly claimed his life… as it was told by the Daily Mail

On September 11, 1976, Niki Lauda raced at the Italian Grand Prix having been involved in a hideous fiery crash just 40 days earlier.

Lauda was left permanently scarred by the smash at the Nurburgring, but his remarkable fighting spirit saw him return to Formula One, and later become world champion twice more.

The Daily Mail’s Ian Wooldridge was at Monza to watch Lauda’s return to the track. Following the great Austrian’s death at the age of 70, here is how our writer described the extraordinary events… 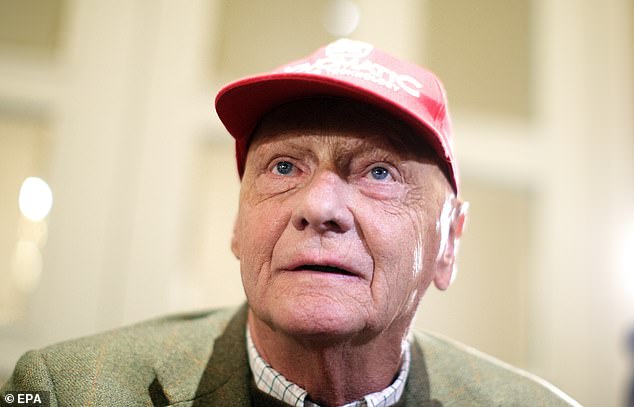 Headline: COURAGE OR MERE MADNESS – Ian Wooldridge watching the incredible man back from the dead at Monza

The rain was smashing vertically into the Monza circuit as the third car out in practice threw up a fantail of solid water, slewed sideways, spun twice and hit the fence.

Watching unblinkingly from the Ferrari pits not 100 yards distant was Niki Lauda. We expect him, as world motor racing champion, to remain emotionally unmoved by a minor spill, but there was another reason for his gaunt, unblinking stare. He has virtually no eyelids. They were scorched off 40 days ago.

So was much of his left ear, the top layers of skin on his upper face and all the skin around the right wrist left unprotected by fireproof covering when his last car exploded in a sheet of flame on the sadistic German track at Nurburgring.

They got him out in 43 seconds. Had they been 20, even 15, seconds slower we would be requested to stand here tomorrow afternoon in the brief traditional tribute to a dead motor sports hero.

Instead, if his Formula One engine can match his nerveless ambition, we shall witness him gearing down from around 190 mph on the Monza straights to something like 85 on the most treacherous bends. He will once again be sitting astride what amounts to an incendiary bomb, and changing gear between 1,300 and 1,500 times with a right hand which could easily have been amputated as recently as the same day that the Olympic Games ended in Montreal. 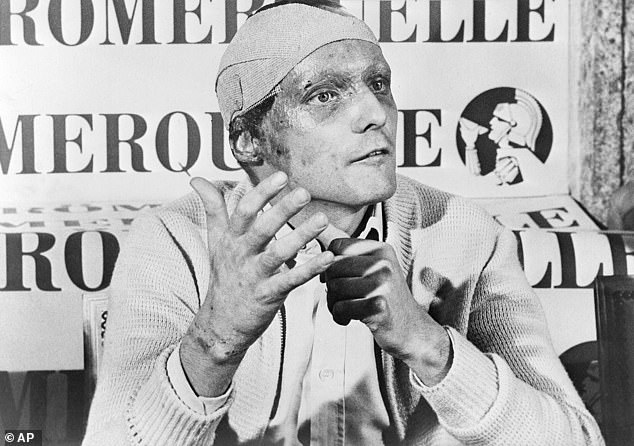 In September 1976, Niki Lauda raced at the Italian Grand Prix after suffering a hideous crash

Is it courage, or madness? Is it bravery, or obsession? Is it one man, aged 27, so unwilling to concede an earthly title that he is prepared to wager life against death when most men would be hiding their desperate injuries in a darkened room in a clinic? And, if so, what is the psychologist’s definition for that?

Perhaps our own James Hunt, the driver closest to wresting the world title from Lauda, comes nearest with the explanation. ‘Niki’, he said, not permitting the close camaraderie of the Grand Prix circuit to cloud reality, ‘is a single-minded chap. If he found you lying on the ground, he would sooner walk over than round you’.

This is the man who will drive the Italian Grand Prix in a flame red Ferrari emitting a sound like a tearing calico. Someone once called him the Red Baron, equating him in outlook with Baron Manfred von Richthofen the First World War air ace who refused to camouflage his starlet fighter, so that his mortal-combat opponents should always know who they were up against.

The allusion was very perceptive. Lauda, proud, abrupt, formal and scrupulously polite, strikes you as more Prussian than Austrian. Even to the point where he fixes your eyes with his, challenging you to allow your gaze to roam over the terrible facial geography left by first-degree burns and, at the moment, first-operation plastic surgery. 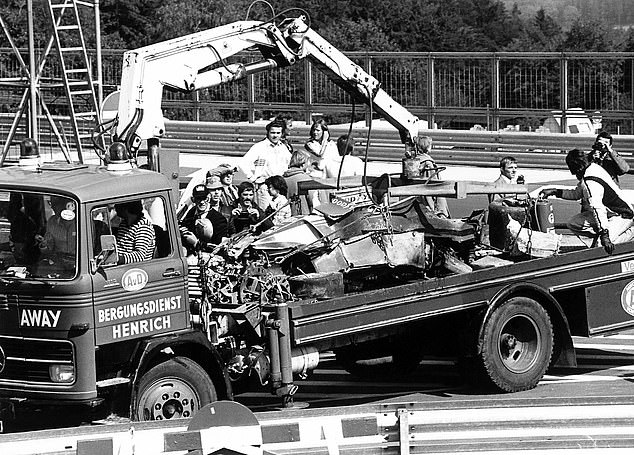 40 days earlier, Lauda had been engulfed in a fireball following a smash at the Nurburgring 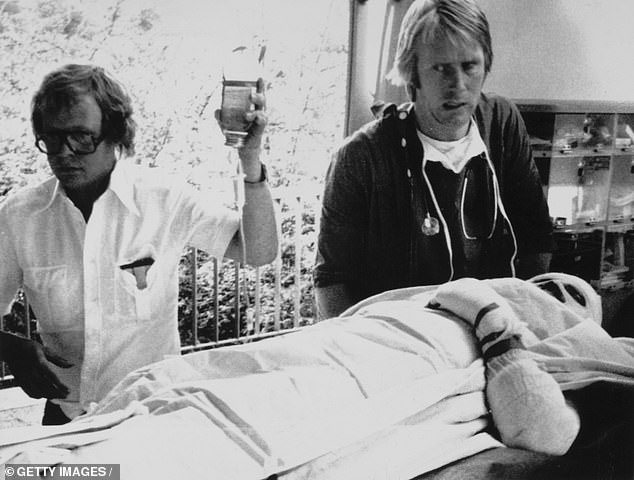 Lauda was left with permanent scars to his face, but determinedly returned to racing

God willing, Dr Rudolf Zellner, Germany’s leading cosmetic surgeon, will rebuild the features over which, at the moment, he has only had time either to lay pink, shiny skin removed from Lauda’s left thigh or cover with a skull cap specially constructed to avoid pressure on what remains of the left ear.

Lauda’s attitude to his disfigurement is to ignore it. It is his friends in the close knit Ferrari team who are left to protect him from his own apparent indifference.

He flew into Milan by private plane on Thursday, checked into an hotel with good food but no glamour 25 miles from the city and, presumably, expected some peace. In fact, his temporary face stared back at him from the front page of the many Italian newspapers scattered around the bars and restaurants, and his dinner was transformed into a grotesque public peep-show.

Word of his presence had spread and they came, in twos and then tens, to gaze for minutes on end at one man back from the dead. At 9pm, declaring himself utterly relaxed but in a condition for which the modern parlance is extremely uptight, Niki Lauda went to bed. 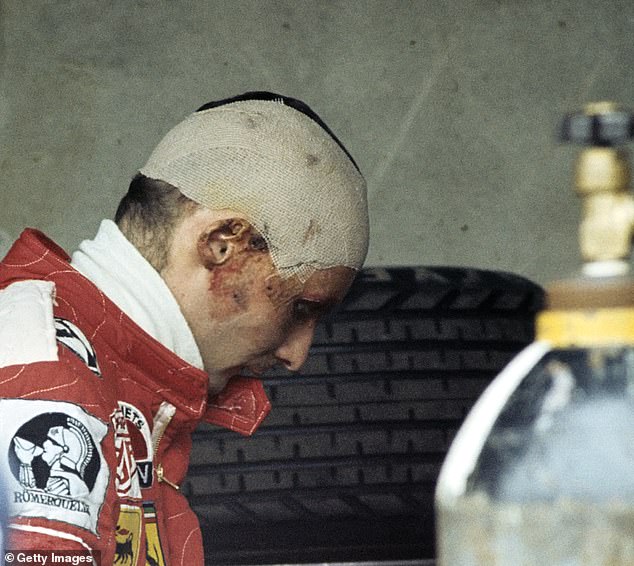 Lauda raced in the pouring rain at Monza, qualifying fifth and finishing the race in fourth 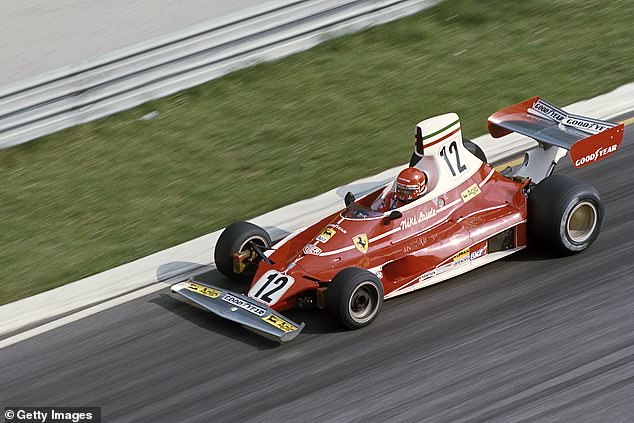 Yesterday it rained so hard across the Plain of Lombardy that Monza practice was suspended. It was still pouring when proceedings resumed three hours later, and Lauda lay in his car, pulled the oxygen feed in under his helmet, steered left out of the pits, drove gingerly round one lap, and then rammed the accelerator to the floor.

He drove two laps extremely fast, stepped out of the Ferrari and announced to a large audience that he was totally fit and not returning to the track a moment too soon. To an Ealing ratepayer with a mortgage and three kids, and a mild ambition to minimally see 50 if at all possible, it confirmed that such men, if not actually dangerous, are certainly different.

Lauda’s obsession with speed started ten years ago when, at 17, he informed his wealthy grandmother that he had crashed a friend’s car and would be in great trouble if he didn’t replace it. This was not strictly true, but it put him on wheels and set him on the course that brings him to Monza this weekend via the very portals of the next world.

Once the doctors had pronounced him capable of driving, there was no one to stop him. Marlene, Lauda’s wife of four months had no chance. 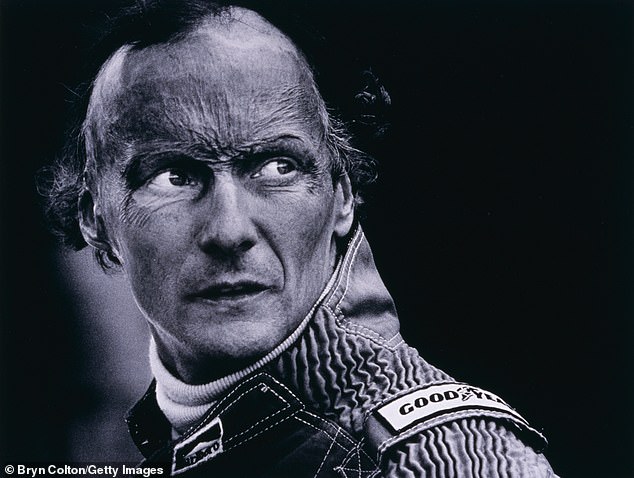 ‘She doesn’t drive the car,’ said Lauda. ‘I do. And we’re both fine.’ There is no room for argument. ‘I do not live as other men do,’ said Lauda. ‘While I can walk and drive, why lie in a clinic? This is my world.

‘I remember nothing of the crash at Nurburgring except the impact. I knew nothing for four days after that, but what I did know when I recovered consciousness was that I had to get better every day, and never slip back.’

Niki Lauda crashed at 180 mph, and just one of the consequences is that for at least the next year he will spend more time under an anaesthetic than he will behind the steering wheel of a Grand Prix car.

Several of his closest friends did not share his luck. The fatality statistics of his sport are such that there are others with whom he will not share old age. More than 100,000 Italians will occupy precariously safe positions around this track tomorrow to see him ride again, and what is in their minds bemuses me almost as much, even now, as what is passing through his.