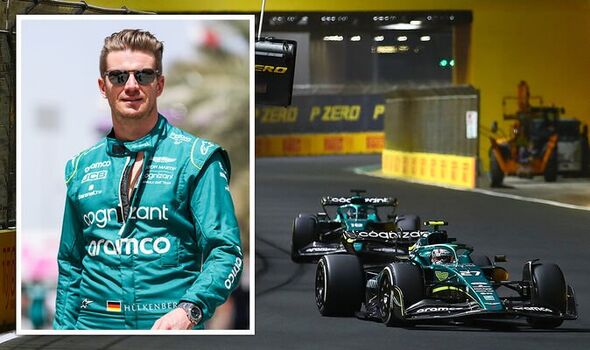 F1’s new regulations have improved overtaking ‘by a lot’ according to Aston Martin reserve driver Nico Hulkenberg. The German claimed it is around 30 percent easier to overtake under the new rules than before in a big win for F1 chiefs.

The on-track action has been praised so far this season with Max Verstappen and Charles Leclerc enjoying epic duels in Bahrain and Saudi Arabia.

Speaking exclusively to Express Sport ahead of the Miami Grand Prix, Hulkenberg said: “It’s definitely improved by a lot, call it 30 percent is the number that sounds right for me. Other drivers might see it differently but it is improved.”

The new package has shifted teams’ focus from the wings to the underfloor. New underfloor tunnels help suck the car into the ground. Meanwhile, the car’s new front and rear wing updates have narrowed the airflow.

This allows cars to follow each other more closely on the track to hopefully create better racing and less reliance on the DRS. However, Hulkenberg warns the new regulations can lead to ‘less slipstreaming’ which may make it more difficult to pass on some circuits.

He also claimed the new rules didn’t change the feel of the cars compared to previous generations.

He told Express Sport: “The counter side is you have less tow effect, less slipstreaming which sometimes makes overtaking not necessarily easier. You can stay close but on the straights you’re not actually gaining so much on the guy in front.

“All in all, if you go into details the is differences here and there, but for me it didn’t change dramatically It still felt very much what I knew from the 2019 and 2018 cars. I felt home pretty quickly.” Hulkenberg got to grips with the new package after being draughted in to replace Sebastian Vettel for the first two race events of the season.

The 34-year-old starred in his Aston Martin comeback, fighting the car from 17th on the grid to 12th at the Saudi Arabian Grand Prix. F1 boss Stefano Domenicali claimed F1 fans would see ‘nose to tail’ racing this season.