The first round is shaping up to be a beauty; besides the early upsets of the No. 1-seeded Tampa Bay Lightning and Calgary Flames, we’re already locked in for at least two Game 7s after the Boston Bruins and San Jose Sharks staved off elimination Sunday.

Here’s a recap of Sunday night’s action (check out replays of every playoff game on ESPN+) and what to watch for on Monday night in today’s edition of ESPN Stanley Cup Playoffs Daily:

Game 6: Boston Bruins 4, Toronto Maple Leafs 2 (series tied 3-3) Boston versus Toronto in a Game 7? Yeah, this one felt inevitable. The Maple Leafs haven’t made it past the first round in 15 years, and it would have been sweet to get over the hump in front of a jacked-up home crowd on Sunday afternoon. But after scoring the opening goal, the Leafs were outworked by Boston, especially in a 16-shot second period. The Bruins’ power play (two more goals on Sunday) looks especially dangerous lately. Though the Bruins ousted the Maple Leafs last year in Game 7 on home ice, the players insist they have no mental advantage. And perhaps no home-ice advantage, either: After all, Toronto has played well in Boston, taking two games in this series.

Game 6: San Jose Sharks 2, Vegas Golden Knights 1 (2OT) (series tied 3-3). Tomas Hertl guaranteed a Game 7 back at the Shark Tank, and his goal in double-overtime ended what so far has been the longest game of the playoffs. Just call him Tomas Messier. How on Earth did the Sharks win this game? They were outshot 59-29. Vegas had home ice and momentum. And yet Martin Jones showed up when it mattered, setting a franchise record for saves with 58. A bright spot for Vegas? Jonathan Marchessault’s goal, his line’s first even-strength tally of the series. The Golden Knights dominated for a lot of the night and should have been able to score more.

1. Martin Jones, G, San Jose Sharks: It was starting to look like the Sharks wouldn’t be able to go far in these playoffs because they had a huge weakness in net. On Sunday, Jones proved he still has the capacity to steal a game, and he definitely stole this one.

2. Tomas Hertl, C, San Jose Sharks: Not only did he make good on his word, but Hertl became the first player in NHL history to score a short-handed winner in a game that required multiple overtimes. 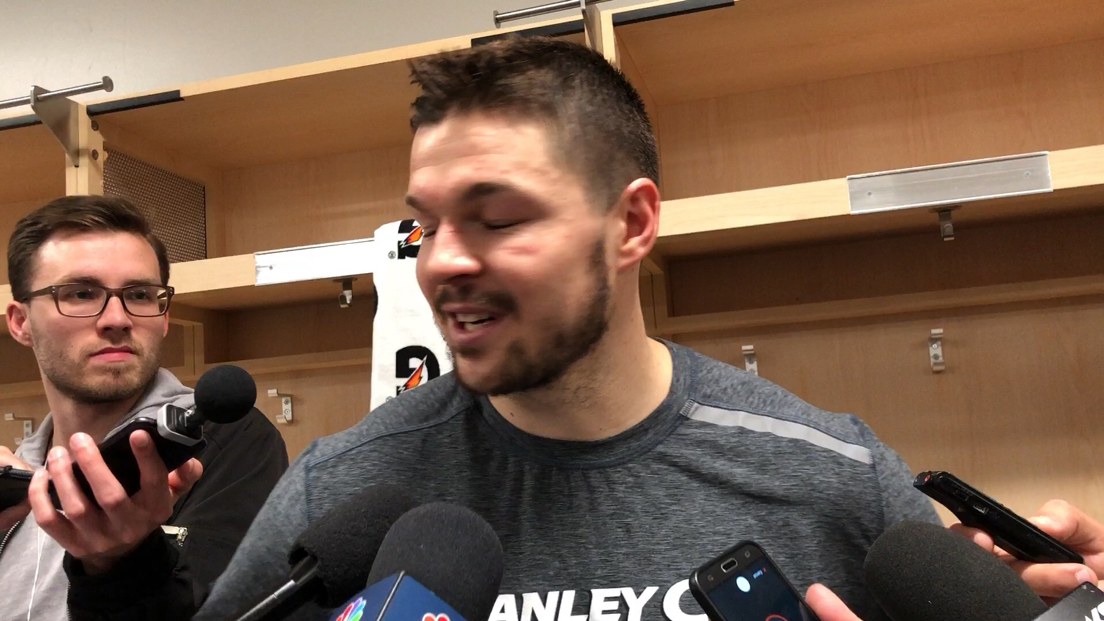 3. Brad Marchand, LW, Boston Bruins: His power-play goal was an important pivot point for the Bruins in this game. His empty netter was a distillation of pure will and sealed it. The top-line winger had three points total in a do-or-die game.

Play of the night

The goal that kept the Sharks alive.

Dud of the night

Canadian teams. Toronto is Canada’s last hope, and it blew a chance to clinch a series at home, with a passionate fan base swarming the streets to cheer it on. If the Maple Leafs don’t win Game 7, Canada will officially extend its Stanley Cup drought to 26 years.

The Capitals won one for T.J. Oshie (who is likely out for the rest of the playoffs after undergoing surgery on his collarbone) and, more importantly, reverted back to their old selves after a brief identity crisis in Raleigh. Nicklas Backstrom has been a goal-scoring machine; can he keep it up as the series moves back to Raleigh? For the Canes, Andrei Svechnikov (concussion protocol after his fight with Alex Ovechkin in Game 3) says he’s aiming to be back for Game 6. We’ll see. The Canes looked frazzled in Game 5 and could use some home cooking.

Maybe all you need to win in the playoffs is a strong goalie, one red-hot line and some confidence. That’s the recipe the Stars used in Game 5 to put the Predators on the brink of elimination. Dallas’ D has been solid, limiting Nashville to 11 goals in five games. And though Tyler Seguin, Alexander Radulov and Jamie Benn were stars in Game 5, there’s plenty of offense to go around for Dallas, which is something we didn’t see in the regular season. Nashville feels stale. Their special teams need to improve (especially the power play, which has been dreadful all season), but the Preds need help getting the puck out of their own zone, and just scoring goals, plain and simple.

Vegas playoff games are still very much a scene.

“The ice has been terrible there, so we might as well play with a tennis ball, skate around and see who can bounce one in the net.” — Brad Marchand has not been shy about his displeasure of the ice conditions this spring at Boston’s TD Garden. Maybe home-ice advantage isn’t an advantage at all.