Cleveland Browns’ Myles Garrett has been reinstated by the NFL following his indefinite suspension for hitting Mason Rudolph with the Pittsburgh Steelers quarterback’s own helmet in November last year.

Garrett, 23, had apologised for his “selfish and unacceptable” actions.

The ban meant he missed the last six games of the 2019 season.

“We welcome Myles back to our organisation with open arms,” said Browns general manager Andrew Berry.

“We know he is grateful to be reinstated, eager to put the past behind him and continue to evolve and grow as a leader.

“We look forward to having his strong, positive presence back as a team-mate, player and person in our community.”

What happened in the game? 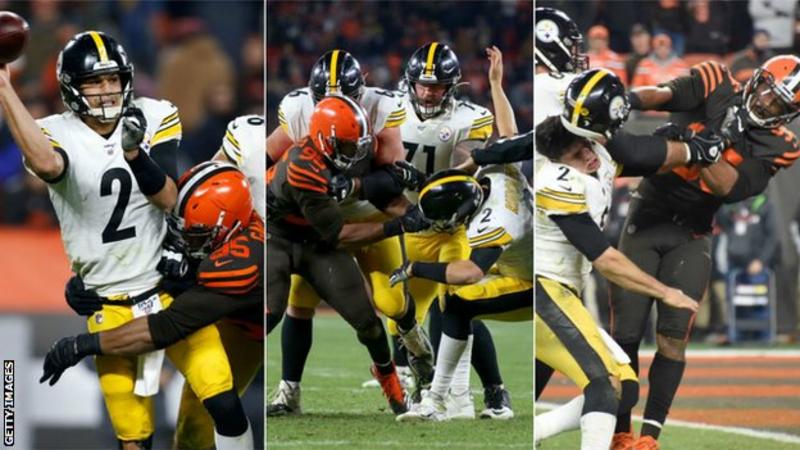 With eight seconds left in the game on 15 November Garrett wrestled Rudolph to the ground after he had released the ball, ripped off his helmet and swung it at his head.

A brawl erupted and defensive end Garrett was ejected from the game.

“That is embarrassing, what I did was foolish,” Garrett said after the match. “I made a mistake, I lost my cool and that’s on me. It’s going to come back to hurt our team.”

Browns quarterback Baker Mayfield called his team-mate’s behaviour “dangerous” and “totally inexcusable” while Rudolph called Garrett a “coward” and accused him of using the helmet as a “weapon”.

“That’s just endangering the other team. He’s going to get suspended. We don’t know how long and that hurts our team,” added Mayfield.

Fox commentator Joe Buck, while covering the game, described the incident as “one of the worst things I’ve ever seen on a professional sports field”.

The Browns beat Pittsburgh 21-7 for only their fourth win of the season – ending the Steelers’ four-game winning streak.