Sure, one of the draft’s best safety prospects knows it’s a positive that he impressed the New England Patriots enough to score an NFL scouting combine interview.

But the Alabama defensive star had questions.

“That was one of the harder meetings that I had,” McKinney said Friday morning. “It was a little tough, a little awkward.”

McKinney said his awkward feeling stemmed from uncertainty. His pedigree includes a dominant junior season in 2019. He led Crimson Tide with 95 tackles (5 1/2 for loss), three sacks and four forced fumbles. He intercepted three passes, broke up five more and blocked a kick.

McKinney prides himself on versatility across defensive schemes. The breadth of his talent didn’t prevent him from also developing his skills in depth.

But is all of that enough?

Leaving his meeting with the Patriots, McKinney couldn’t tell.

“Just toward the end, I wasn’t sure if they enjoyed the meeting or if I did well,” he said. “You kind of walk out of these meetings, kind of uncertain sometimes. But I think that’s just how it goes. You just try to do the best you can.” 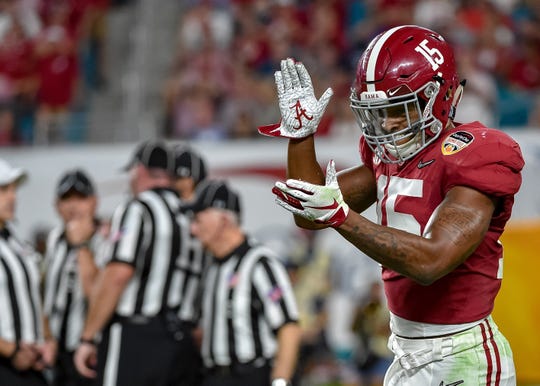 Perhaps the awkwardness will predate a productive relationship. This isn’t McKinney’s first time unsure if an authority figure approved. Arriving at Alabama, McKinney says playing for Nick Saban as a freshman was “a little rough.”

“I used to think he didn’t really like me,” McKinney said. “But over the years, I think we’ve grown. He’s come to trust me.”

That trust manifested in McKinney offering recommendations to Alabama game plans. He watched film before and after practices at Alabama in search of new wrinkles. Then he’d tell coaches: “Hey, I can do this. Maybe we should try this.” Implementing his own interpretation of coverages enabled him to better carry out their intention. Be it operating as a “technician” in coverage or blitzing, McKinney executed. He honed in on his own game film rather than studying all-time greats.

“I don’t watch a lot of other people,” McKinney said. “I don’t really get any tips from anybody else.”

NFL Network chief draft analyst Daniel Jeremiah ranked McKinney as the top safety in the class and 15th-best prospect overall. Jeremiah touted McKinney’s prowess when working close to the line of scrimmage. He can play high but thrives even more when dropping down to play in the box.

His football IQ might have been what piqued the interest of Patriots talent evaluators.

“Coach Belichick would always preach to those guys: ‘You cannot win with a dumb safety,’” Jeremiah said. “You’ve got to have an intelligent and good communicative safety. And I think that’s McKinney what is.

“He’s one of the safest players in the draft.”