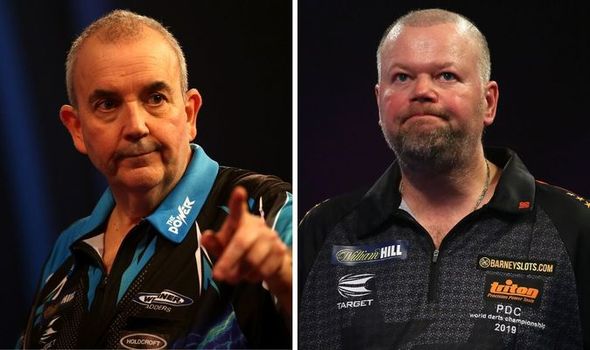 Phil Taylor and Raymond van Barneveld, who have an incredible 21 world titles between them, will be playing tonight’s clash from their homes using an interactive Target Nexus dartboard. The event has been organised by Paddy Power, who will donate £1,000 to HNS charity heroes for every 180 that lands during the match.

“We wanted to give sports fans some action and for sports stars to have some competitive fun – what better way than using our online dart network to create a Darts from Home match!”

Explaining the logistics of the match, Taylor said: “Paddy Power are sending some equipment up.

“It’s all going to be sanitised, left on my car park, so someone will go and pick it up and bring it in.

“They’ve told me how to set it up, then I’ll put it back outside in the box and they’ll come and pick it up and take it away.

“It’s like James Bond stuff this is, it’s ever so strange.”

What time is the match?

Taylor vs Van Barneveld is scheduled to get underway at 7pm BST tonight.

How to watch the darts

“The whole world has been lamenting the loss of top-level sport to keep us entertained in these strange times,” said a Paddy Power spokesperson.

“Well you don’t get much more top-level than Taylor and Barney when it comes to darts, and both players will be really going for it.

“It may not be Ally Pally, but Darts From Home should at least offer some relief for all my fellow sports fans who are going stir crazy during lockdown.”

What is the format of the match?

The match format is first to seven legs (best of 13).

It will be a traditional 501 start, double-out game.