Four biggest names not chosen during the 2020 NBA draft

The 2020 NBA draft has come and gone. For 60 players Wednesday night their dreams came true by hearing their name called on national television.

What about the players who were on the cusp to sneaking in the second round? Here’s a look at four of the biggest snubs from the first two rounds — as all four of these players are poised to sign with teams.

Devon Dotson, Kansas. Dotson was floating around the low second round on mock draft boards for a while after an All-American campaign for the Jayhawks last year, averaging 18.1 points and 4.1 assists. He’s a great ball-handler with high basketball IQ — a major steal for whichever team picks him up.

Markus Howard, Marquette. The 5-11 point guard lacks size and that’s likely why he hasn’t been getting legitimate consideration despite the fact that he was the best scorer in college basketball for two consecutive seasons, averaging 27.8 points a game as a senior. The NBA is trending towards shorter guards, though, with the best case of that the Toronto Raptors with Kyle Lowry and Fred VanVleet. Howard is as underrated as they come and just needs an NBA home to shine. 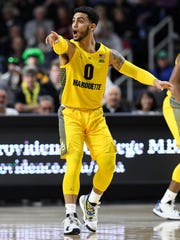 Killian Tillie, Gonzaga. The 6-10 forward has four years of winning college basketball experience under coach Mark Few, including playing in the national championship game in 2017. Injuries likely kept him out of a top-60 pick. He can stretch the floor with his outside shooting and is a capable passer to fit in nicely as a glue guy on any NBA roster.

Mamadi Diakite, Virginia. The 6-9 forward was a central piece in the Cavaliers’ national championship in 2019 and his size and athleticism weren’t always on display in a methodical halfcourt offense. But make not mistake, Diakite has a high motor to where he can thrive in the open court and he’s developed enough defensively to land on an NBA roster.