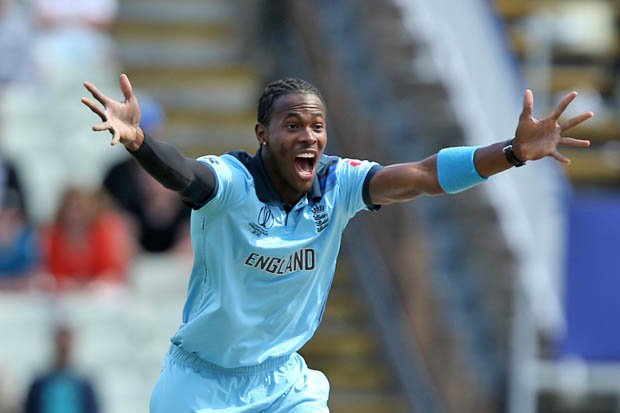 Having stroked the opening ball of the match through the covers for four, Warner now found himself heading to the ropes himself with the boos of home fans ringing in his ears.

The Aussies were 10-2 and with Peter Handscomb walking to the crease for his first knock of the tournament.

It was one that lasted just four runs and 10 deliveries, before Woakes removed his middle stump to leave the visitors reeling at 14-3.

At the other end Archer was ripping into the Aussies like a man possessed, hurtling down vicious deliveries in excess of 90mph.

One bouncer broke the helmet of Alex Carey and left him with blood trickling from his mouth and needing a full bandage wrapped around his head to support his jaw.

And to think, there had been a debate before the tournament started about Ofra even being in the team!

Despite the onslaught, Smith and Carey somehow managed to hang around and rebuild, putting on 103 for the fourth wicket.

That was until Rashid swung the momentum back in England’s favour again with two wickets in five balls for just one run.

He removed Carey for 46 when the Aussie was caught in the deep by substitute fielder James Vince, before trapping Marcus Stoinis lbw for a second ball duck following a wrong ‘un that bamboozled his opponent. 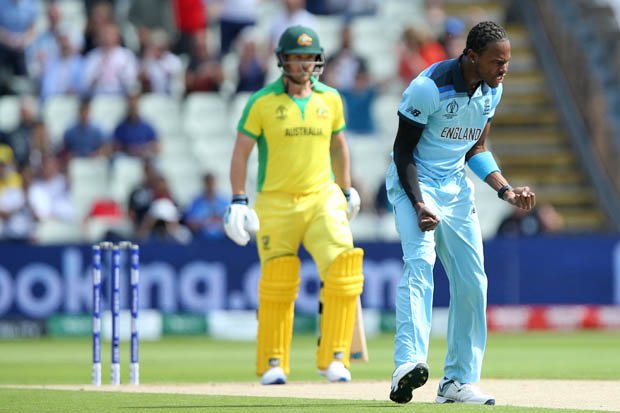 The Aussies were back in trouble at 118-5, but Smith went on to complete his 50 and while he remained at the crease, the visitors still had a chance.

But all Smith seemed to do was see team-mates come and go at the opposite end with alarming regularity.

The dangerous Glenn Maxwell smashed 22 before looping a catch to Morgan off the bowling of Archer, then Rashid dismissed Pat Cummins to leave the Aussies floundering at 166-7.

Smith continued to be the rock, however, and only Sachin Tendulker now has more scores of 50 and above in World Cup knockout matches.

His innings was a masterclass in patience and determination and England have just three weeks before the Ashes start to discover how to get him out.

In the end it took a stunning piece of fielding from wicketkeeper Jos Buttler to run Smith out on 85 and deny him what would have been a remarkable century in the circumstances.

When the capable Mitchell Starc was then caught behind off the next ball for a useful 29, all hopes the Aussie had of reaching challenging total had gone.

Now it was time for England to hold their nerve, because they will never have a better chance of reaching a World Cup final.