Several trainers are sending out an abundance of winners with horses they were sent from the Darren Weir disposal, but it's been a mixed bag for the jockeys most closely associated with the Weir yard since the leviathan operation shut down and dismantled in double quick time.

The likes of trainers Ciaron Maher and David Eustace – who bought Weir's Dowling Forest stables in a firesale within hours of Weir being disqualified for four years – David Hayes and his team and Winx's handler Chris Waller, to name but a few, have all enjoyed success in the past few weeks with ex-Weir trained horses. 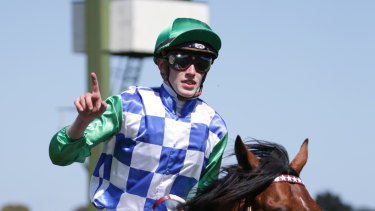 Young jockey Ben Allen has not fared as well as some of his more established counterparts since Darren Weir was disqualified.Credit:AAP

And two of the state's leading jockeys, Damian Lane and Mark Zahra, have barely missed a beat since the Ballarat battalions ceased to be part of their riding armoury.

The duo were in demand before they began riding for Weir, and while both men – particularly the younger Lane – can thank Weir for some of their big race winners, they had enjoyed top level success for other trainers and are having no problems in picking up rides in big races through the carnival for other handlers.

At Caulfield on Saturday Zahra had rides in all bar one race and scored on Qafila for Hayes while Lane was also booked for several mounts, including the disappointing Oakleigh Plate favourite Nature Strip for Waller.

But apprentices Ben Allen and Ethan Brown, who were established through Weir's support and enjoyed plenty of success for him, have not, as might be expected, fared as well since his closure.

It is particularly difficult for young jockeys, especially those who have just lost their claim, to secure mounts during the big carnivals dominated by group 1 races and the leading riders.

Allen rode at the country meeting at Yarra Valley – where he had a big book of rides in moderate races – rather than Caulfield on Saturday, and the previous Saturday at Flemington he had two rides on outsiders in benchmark handicaps. He did ride a double for Matt Laurie at Yarra Valley, however, so his motivation is stronger than ever.

Brown did not ride on Saturday and had only one mount at Flemington last weekend although he did ride a winner at Seymour last Tuesday.

John Allen and Dean Yendall, the two riders who probably were most closely associated with Weir, will have to work hard in coming months to get anything like the number of opportunities they could have taken for granted when Weir was in operation.

Irishman Allen won the VRC Derby for the stable on Extra Brut last November and lightweight Yendall came to the fore in the city in tandem with Weir's rise.

Yendall only had one ride at Caulfield on Saturday but he made it count, landing the group 1 Oakleigh Plate aboard Booker for the Matt Ellerton/Simon Zahra stable.

Afterwards Ellerton was full of praise for the jockey, while Yendall was just grateful to have been given a chance to start rebuilding his career.

''He certainly rode her 10 out of 10. She drew 14, he cut the corner and saved a lot of ground. I was waiting for him to edge out but he didn't,'' a delighted Ellerton declared.

Yendall was philosophical about the task ahead.

''I have always said to other owners and trainers that I am aiming to get lots of rides regardless of what's happened. It made my job easier just to ride for Weiry because he had a lot of horses,'' Yendall said.

''I have had no trouble getting rides in the bush, it's just the city meeetings, I only had one ride today so I made the most of it.''

Allen too advertised his skills to great effect when causing an upset in the group 3 Zeditave Stakes aboard the still unbeaten Terbium for Phillip Stokes, in the process lowering the boom on odds on favourite Zousain from the Waller yard

''He gets up at 2am, drives to Pakenham to ride work for me. He's very dedicated,'' said Stokes. ''He's only had three rides for me for two wins now.''