Tizzard hails winning return of The Big Breakaway at Cheltenham

‘For a first time over fences, you couldn’t ask for anything more’: Joe Tizzard hails winning return of The Big Breakaway at Cheltenham

The Big Breakaway made a flawless, winning chasing debut at Cheltenham to underline the resurgent form of the Colin Tizzard stable ahead of Lostintranslation’s attempt to win back-to-back running of the Betfair Chase at Haydock on Saturday.

The only career defeat for The Big Breakaway, who cost 360,000 euros, was his fourth to Envoi Allen in last season’s Ballymore Novices’ Hurdle and his next stop likely to be the Grade One Kauto Star Novices’ Chase at Kempton on Boxing Day.

After the Robbie Power-ridden gelding had pulled 10 lengths clear of Doc Penfro, Joe Tizzard, assistant-trainer to his father, said: ‘The Big Breakaway makes me tingle he is that special. For a first time over fences, you couldn’t ask for anything more. 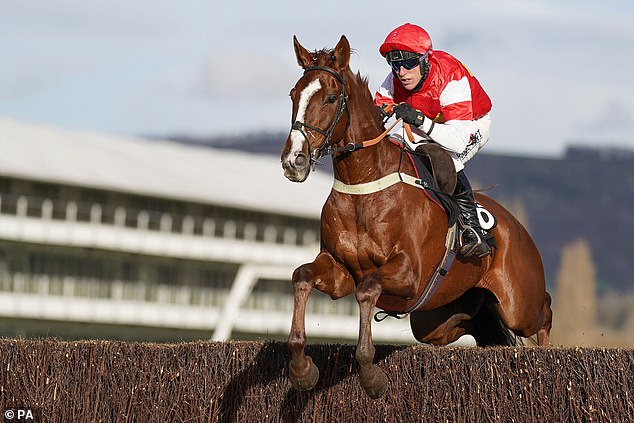 ‘Robbie actually said he wouldn’t mind dropping him back to two and a half miles just to sharpen him up and make him think on his feet a little bit so that when he gets to the Festival it doesn’t get caught out when it happen two gears faster.’

The Big Breakway’s win was a fifth from the last 16 runners for the stable – a significant improvement on the four wins from 61 starters in October.

Joe added: ‘We turned our horses out on March 23, a month earlier than usual (because of Covid) to save the business and look after our owners. They had more time on the Spring grass. It has just taken two or three weeks longer to get them where we want.’

Power later made it four wins at the meeting when winning the Greatwood Hurdle on Emmet Mullins-trained The Shunter.

Henry de Bromhead’s Arkle Novices’ Chase winner Put The Kettle On is now three from three at the track after winning the Shloer Chase by a length and a quarter from Duc de Geneievres.

Defi Du Seuil, last season’s Tingle Creek and Clarence House Chase winner, was very awkward at the first fence and ultimately pulled up before the last.

Trainer Philip Hobbs said: ‘He just got very tired very quickly and Richard (Johnson) thought there was no point jumping the last.’

Lucy Alexander, the 2013 champion conditional jockey, will find out tomorrow (Tuesday) if she needs a second operation after sustaining a back injury at Newcastle on Friday. Alexander has already had a measure to stabilise vertebrae in her lower back.

King George remains on the agenda for Lostintranslation