Chris Waller has ended the Prix de l’Arc de Triomphe dream for Melbourne Cup winner Verry Elleegant, opting for another Australian spring campaign with an English option of heading to Champions Day at Ascot in October.

The 11-time group 1 winner will race on and follow a familiar path through the Winx Stakes and Chelmsford Stakes before a decision is made between heading to England or continuing an Australian preparation. It will give her the chance to have a longer spell to recover from an underwhelming autumn campaign which included victory in the Chipping Norton Stakes. 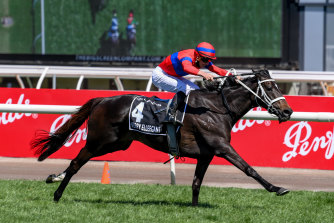 Verry Elleegant in full flight on her way to winning last year’s Melbourne Cup, a title she could defend in 2022 Credit:Eddie Jim

Waller identified a 2400m fillies and mares group 1 on Champions Day as the perfect race if the rising seven-year-old is to travel, but she could stay in Australia for the Cox Plate and Melbourne Cup.

“Whilst running her in the Arc would be a dream come true for all of us, we just felt that it would come around too soon to enable her to have a proper spell and be fully prepared in Australia for this assignment,” Waller said in a statement.

“However, a trip to Europe later in the spring is still strongly on the cards providing she returns to the form she showed in the spring when dominating the Melbourne Cup.

“The race that we have identified as a prospective target is the 2400-metre group 1 fillies and mares race on Champions Day at Ascot [on October 15], one of the most prestigious race days in the world and a worthy stage to showcase her talents.

“It is likely that she will have three runs in the spring with the Winx Stakes, Chelmsford, Kingston Town and the Underwood all being considered prior to a decision being made on a Melbourne Cup defence or a trip to Europe.”

The timeline for travelling to European would be very tight from a run in the Kingston Town Stakes or Underwood Stakes at the end of September.

The decision could come down to what weight Verry Elleegant is given for the Melbourne Cup.