Lunch with Cummings provides food for thought on Libertini and Fayerra

Supping with Anthony Cummings is not for speedy squibs – being adept with chops sticks and bending the elbow like an old-time poker machine handle are required to see out the course and distance.

Despite a demanding race, the experience was more than worthwhile, centring on turf lore, horses – “they are smarter than we are”, according to him – the Cummings dynasty and word games. 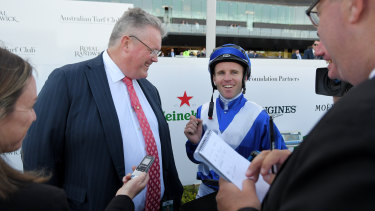 Trainer Anthony Cummings and jockey Tommy Berry after a win on Libertini.Credit:AAP

Obviously, the decades have slid by fast and furious since a fresh-faced, much slimmer version of Anthony joined his father, the master Bart Cummings, at Randwick.

The venue on Tuesday was a leading Woolloomooloo Chinese eating joint and the host Royal Ascot, whose director of racing and public affairs, Nick Smith, picked up the settling.

As it happened to be his birthday, Anthony made the pace a cracker, although Smith wouldn’t allow him near the wine selection – a situation he filled a few years back leaving Royal Ascot on the verge of receivership.

Anthony was keen to take on the top-class speedsters Redzel and Nature Strip with Libertini because he figured Redzel would eyeball Nature Strip and test his wind problem.

Due to the Nature Strip involvement, Saturday’s $750,000 Lightning at Flemington was an early topic. Libertini, trained by Anthony, will be missing because owner Gerry Harvey preferred the easier $200,000 Light Fingers at Royal Randwick.

Anthony was keen to take on the top-class speedsters Redzel and Nature Strip because he figured Redzel would eyeball Nature Strip and test his wind problem. The issue affects those afflicted to different degrees, an example being So You Think, a Bart Cummings great. The stallion had a breathing drawback that had other horses gasping. Libertini would get a perfect trail behind the tested Nature Strip and, under the scenario, would be too powerful at the finish.

However, what Harvey wants, Harvey gets from the trainer, who describes him as racing’s greatest benefactor. Mind you, Harvey was instrumental in achieving a financial result for Anthony against Nathan Tinkler – the equivalent of climbing the most difficult side of Everest. 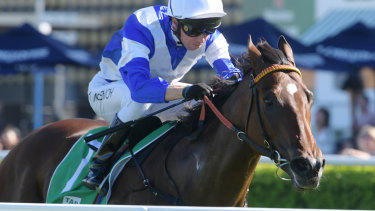 Libertini will resume in the Light Fingers at Randwick.Credit:AAP

Getting back to Anthony’s youth was entertaining. On route to school one morning in the 60s he saw Galilee lying down on a stable lawn as a vet chipped away with a chisel and hammer on his leg. Saintly was good but Bart Cummings never had a better horse than Galilee.

Following the early courses James, who now holds the reins at Godolphin, took his leave. Previously his diction had impressed the company.

“We always encouraged the children to play word games,” Anthony divulged, which prompted the memory of another son, Eddie, in a partnership then with Anthony, after they won the Villiers at Randwick with Sky Boy.

Eddie referred to the “serendipity” of the occasion. I had to ask him how to spell it. Anthony’s eldest son Bartholomew is a weight-for-age debater, a legacy from which his brothers benefited, and an English teacher.

Throughout his career, Anthony has displayed a knack with outsiders. Thus the subject arose concerning his charge Fayerra in the Inglis Millennium at Warwick Farm on Wednesday with Collett in the saddle. The trainer described him as “the most successful betting jockey in New Zealand”.

Over there, jockeys are allowed to punt but have to publicly list their bets. “Jason was on top,” Anthony maintained.

The trainer, too, has dabbled in successful punting and attributed much of his profit to speed maps.

Now retired, he caught the ear when he declared he was considering a comeback for Fayerra, which sent the audience scuttling for ammunition to support the two-year-old. Alas, Fayerra was scratched at the barrier but is an acceptor for today’s Lonhro Plate.

With the staff readying for dinner I took my leave. The trainer was still in a full gallop, no wind infirmity evident, with Vin Cox and a brewery owner from Melbourne.

Passing an outside table on legs unsteady, a diner remarked: “There’s a classic case of peripheral neuropathy”. I wasn’t going back to Anthony to find out what it meant.