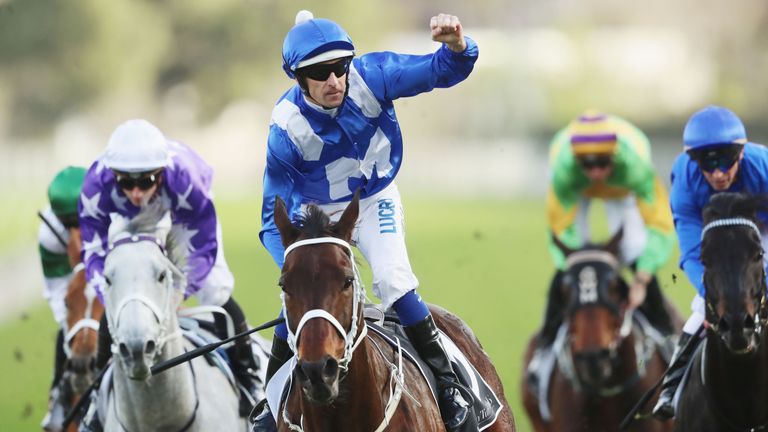 Trainer Chris Waller is keeping his cool ahead of Winx’s bid for an historic fourth victory in the Ladbrokes Cox Plate.

The Australian wonder-mare has won 32 of her 38 career starts to date, beating Black Caviar’s record of 25 successive wins when making it 26 on the spin in a race named in her honour at Randwick in August.

She has since won her third George Main Stakes and her second Turnbull Stakes to stretch her winning run to 28, with Hugh Bowman in the saddle on all but two occasions.

On Saturday she will carry the hopes of a nation as she bids to become the first horse ever to win the Moonee Valley showpiece four times, surpassing the record she currently shares with Kingston Town, who completed a hat-trick between 1980 and 1982.

Despite the weight of expectation, Waller insists he is not feeling the nerves just yet.

He told At The Races: “At this stage I’m pretty comfortable. The beauty of Winx is we’ve been in this vein of form with her for a number of years. The first 12 months was building and the next three years has just been maintaining.

“It’s been an amazing experience. We haven’t been used to the fuss, the media and working with such a champion in herself.

“This week has gone to plan. The horse is perfect, which is making me a feel a lot more relaxed. She’s in great form.

“We’re constantly running checks, making sure she’s still at her best. While she is, the pressure levels aren’t too bad.”

Waller is respectful of each of Winx’s seven rivals, with Saeed bin Suroor’s British challenger Benbatl widely regarded as her biggest threat.

However, the trainer is unsurprisingly confident his pride and joy will prevail.

“The fact is it’s going to take a champion to beat her, or the bounce of the ball to go against you,” he added.

“We’re aware of that and respectful of what happens on the racetrack. You never go into a race thinking you’re going to win because you’ll come off second-best.

“We respect the opposition. There’s influence from England with Benbatl there. He’s got form in Germany and Dubai, which always needs to be respected, and he did win here in Australia.”

Bowman has guided Winx to 27 victories in total and ominously for her rivals, feels she is at the peak of powers.

“It seems she is (better than ever) – that’s the reality. Physically she’s a little stronger and she’s much more relaxed within herself and much more straightforward.

“At the moment she’s taking it all in her stride, she’s being very sensible and just judging by the way she looks in herself, I think she’s ready to peak on Saturday.”

Bin Suroor believes there is a chance Benbatl could spoil the party.

The son of Dubawi has won three times at Group One level this year, landing the Dubai Turf at Meydan, the Grosser Dallmayr Preis in Munich and the Ladbrokes Stakes at Caulfield just a fortnight ago.

“The filly is a superstar here in Australia. She’s good, but our horse is also good. We’ll take our chance and go from there.

“He’s improved this year. Physically he looks much better.”

Oisin Murphy has enjoyed a spectacular season and is also quietly confident about toppling the mighty Winx.

He said: “Benbatl is a very good horse, I’ve won two Group Ones on him and he gave me my first ever Royal Ascot winner.

“Winx is obviously an outstanding racemare, but I think I’ve got a very good chance. I’m really excited and looking forward to it.

“It’s not going to be easy to beat Winx, but I think it’s possible, and certainly I wouldn’t swap Benbatl for anything else in the race.

“Winx has got an unbelievable record, but he is probably the best horse she’s come up against, in my opinion.”